Hobbyists offer view of the personal, plus history through stamps 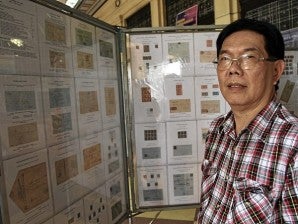 ROBERT Tan, president of the Philippine Philatelic Federation: Reviving an interest in what is considered as the world’s most fascinating hobby. PHOTO BY NIÑO JESUS ORBETA

Before children of the new generation forget how a stamp looks like, postage stamp collectors and the Philippine Postal Corp. (Philpost) have teamed up and brought out their treasured compilations for the public to see the biggest stamp exhibit to be held in the country.

The Philippine Philatelic Exhibition (Philpex) 2012 is out to prove that stamp-collecting  still has a place in the  hearts of the young who have become so obsessed with instant communication that writing letters in longhand has become almost like a dying art.

Philpex 2012 is a festival of international exhibits and entries from member clubs of the Philippine Philatelic Federation (PPF) with the theme “Knowledge and fun through stamp-collecting.”  The public can view the display for free until Feb. 3 at the main lobby of the Central Post Office at Liwasang Bonifacio in Manila.

Lawrence Chan, FSCC officer, told the Inquirer that the exhibit is a show-and-tell on a much grander scale where participants in the competition and exhibit produce baby theses on their respective multi-themed collections.

“In their presentations, they describe their collections, including a  brief history and discussion on the stamps or other philatelic materials they have included. Sometimes they tell stories of themselves in the process, allowing a person going through the collection to get an insight on the exhibitor,” Chan explained.

Among the more intriguing displays is a presentation by Dionisio Taeza which he dubbed “Friends Never Die, They Just Fade Away,” for which he was awarded a bronze medal under the category of thematic philately.

Taeza’s exhibit featured a long exchange of letters and postcards between him and a friend.

“Extraordinary Stamps,” arranged by Jerson Danseco of the Quezon Philatelic Society, lives up to its title, earning for the exhibitor a silver bronze medal under the thematic philately category.

Danseco included a small disc-shaped stamp from the People’s Republic of China, which can be played on any CD player, as well as other odd-shaped postage stamps. 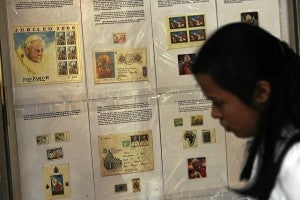 In his “Hologram” collection, which won for him a large vermeil trophy under the thematic philately category, Nilo Dizon highlighted the history and  of holographic postage stamps in  his massive compilation.

Viewers will notice stamps covered with a thin film of silver foil. Up close, one sees pictures of prominent personalities and famous vistas from the postage stamps’ countries of origin.

Postcards, commemorative coins as well as stamped envelopes with calligraphic longhand writing on its face to indicate the addressee of the post, are also on display.

Chan said the use of multi-media by the exhibitor is generally accepted if it forms part of the theme.

Longhand writing can also earn points for stamp contest competitors, particularly if the person he corresponds with is famous, he said, adding that there is also a need for a catchy title for the collection.

In Ruiz Peñafrancia’s exhibit, “Blessed Pope John Paul II, the Making of a Saint,” for which the philatelist from the Naga City Philatelic Society earned a silver bronze under the thematic philately category, she  showed important events in the late Pope’s life.

Becker won a large vermeil trophy under traditional philately for his collection of Philippine government and anniversary  slogans.

The youth philately exhibits, collections of people below 18 years old, brought a breath of freshness to an otherwise, adult-dominated hobby. Collie Marquez’s “It’s the Cat’s Meow,” a collection of felines on stamps, got a silver medal.

Joanna Argosino’s “The Time Giants Ruled the World,”  dinosaurs depicted on stamps, earned for her a silver under the same category, while  Reena de Jesus ran off with  a vermeil trophy for her “The World of Music” exhibit.

Dojie Lutera, FSSC president who was awarded a vermeil trophy for his “Postal History of the Philippine Cordillera” collection under the postal history category, lamented the dwindling number of stamp collectors in the country.

Recalling a time when there were more than 100,000 local  stamp hobbyists, he said he hopes Philpex would  “revive an enthusiasm and appreciation” for stamp-collecting.

“The challenge  for us is to renew an interest in philately,” Lutera said. “As you view each exhibit, take time to enjoy the collections. You can see how beautiful the world is through our eyes.”