Cascolan to PNPA cadets: Best training you'll get is to be assigned in far places | Inquirer News
Close
menu
search

Cascolan to PNPA cadets: Best training you’ll get is to be assigned in far places 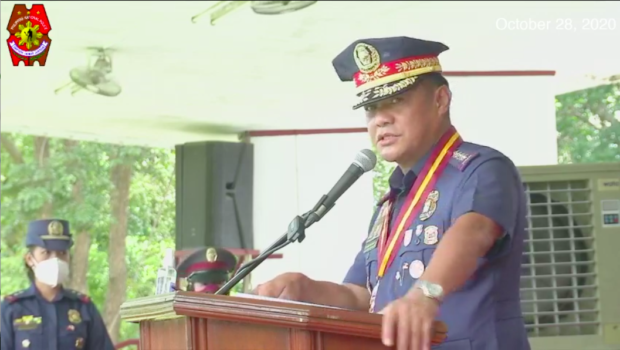 PNP chief Police General Camilo Cascolan delivers his speech during a testimonial parade held for him by the PNPA in Cavite. Screenshot from PNP Facebook live

“I hope you will be assigned not in NCR [National Capital Region], not in cities, doon kayo sa labas ma-assign para matuto kayo [there outside so you’ll learn] and that’s how I really learned,” Cascolan said in a speech during a testimonial parade at the PNPA in Silang, Cavite.

“I have been a cadet myself and it is really very very hard most especially when you graduate and be assigned in far-flung areas but it is one of the best training sites. The training and requirement that each and every one of us needs,” he added.

Cascolan also urged cadets to enhance their skills of becoming a future police officer as Filipinos expect much from law enforcers.

“Keep in mind that you are the cream of the crop. Your main responsibility while you are in the academy is to study, acquire, and hone your skills and prepare yourselves well for the rigors of being a police officer. The people in our country expect much from us,” he said.

“Always live by the PNP motto: “to learn today to live tomorrow” and let our people regard and say that, ‘Ang pulis ko responsable, respetado at disiplinado’ [Our police are responsible, respectable, and disciplined.],” he went on.

Records from PNPA showed that the PNPA Class of 2024 has 306 newly-accepted cadets.