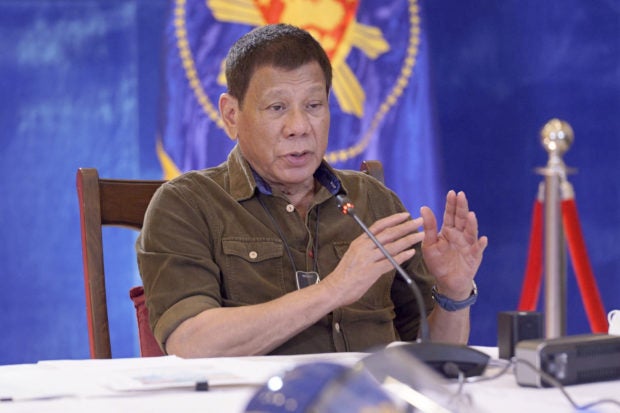 President Rodrigo Roa Duterte talks to the people after holding a meeting with the Inter-Agency Task Force on the Emerging Infectious Diseases (IATF-EID) core members at the Matina Enclaves in Davao City on October 26, 2020. ARMAN BAYLON/PRESIDENTIAL PHOTO

“The government is committed to ensure fair, transparent and non-discriminatory competition for purchases of goods and services, and embraces the broader purpose of promoting good governance and the efficient and effective management of public resources,” Duterte said in Administrative Order No. 34 signed on Oct. 23, but only made public Tuesday.

Duterte instructed all agencies including government-owned or -controlled corporations and financial institutions to post on their respective official website details on the procurement of their infrastructure projects.

This includes the project title, location, approved budget for the contract, the winning contractor and the detailed estimates of the bid as awarded.

Agencies must also disclose in their website the start of construction, target date of completion, completion rate, project status and reasons in case of delay.

“For contracts involving projects with an approved budget of P50 million and above, the foregoing post-award information shall be published once in a newspaper of general circulation, in addition to posting the same on the respective official websites and social media platforms of the agencies concerned,” Duterte said.

The President also directed the Government Procurement Policy Board to prepare a quarterly consolidated report detailing the number of times a person or an entity has been blacklisted, the offense or violation committed and the penalty imposed.

Non-compliance to the order will be grounds for administrative actions against the erring official or employee.

In his previous speech, Duterte said he wants government officials to publish notice of procurement and even bidders’ addresses in newspapers.

The President said he also wants Cabinet officials to disclose their agencies’ spending, including its pandemic response, either every 15 days or monthly.