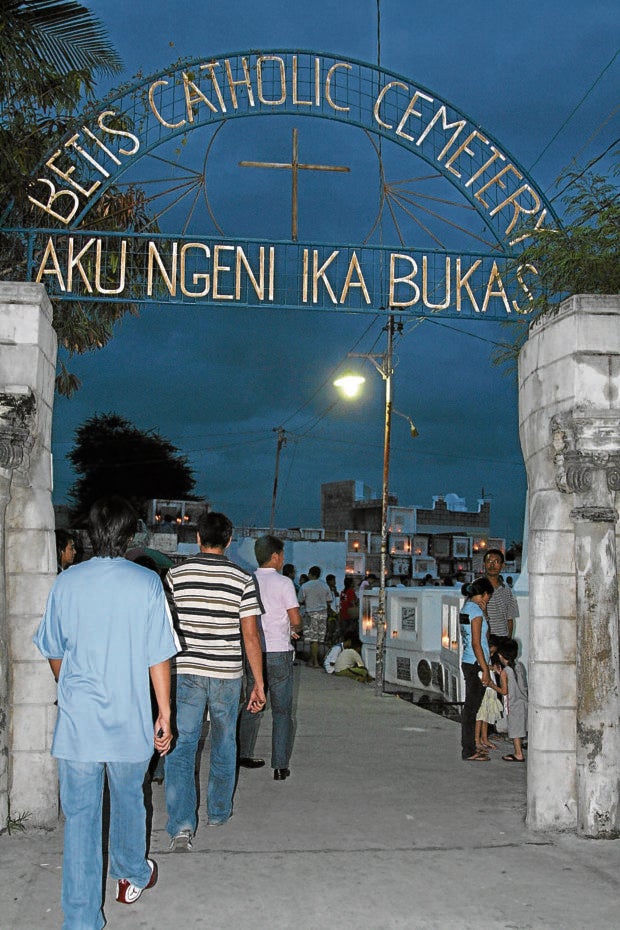 GRIM REMINDER An arc at Betis cemetery in Guagua, Pampanga, reminds visitors that death exempts no one. —TONETTE OREJAS

GUAGUA, Pampanga, Philippines — Catholics in the old district of Betis in this town are continuing its tradition of observing All Souls’ Day (Nov. 2) for nine straight days, the longest of such rite in the country, but with lots of precautions against the coronavirus.

They have been coming at different times of the day and in small batches to the cemetery in Barangay San Nicolas, ahead of the closure ordered by Mayor Dante Torres on Oct. 31 to Nov. 10, according to Fr. Raul de los Santos, head of the St. James The Apostle Parish, also known as the Betis Heritage Church.

In the Feast of the Dead (“daun” to Kapampangan), the devout visit the tomb every day for nine days to stay with their dearly departed, recite the rosary, offer flowers and light candles.

Because these are done earlier than the original Nov. 1 to Nov. 10 schedule, De los Santos said he would have to offer Mass at a chapel near the cemetery and bless the tombs and mausoleums on or before Oct. 30.

“I don’t think, or even see and feel, that the people will be affected by the cemetery’s closure. We in Betis always love and remember our dead. We pray for them as always,” he said.

Retaining an old feature of the tradition, De los Santos said novena Masses would be held at the church every 5:30 p.m. from All Saints’ Day (Nov. 1) to Nov. 10.

In the Masses, the intentions for the dead are to be read for 15 minutes. Betis folk abroad have the names of their departed included in the prayers.

De los Santos said the church, which the government proclaimed a national cultural treasure in 2005 for its visual catechism, has not been totally closed at the start of the strictest community quarantine in March because people came to pray and hear Mass from the sculpted door.

Aside from the nine-day daun, the dead are respected in other ways.

“We do not allow the dead to be buried without the priest saying Mass for them. If that is not possible, we at least allow the mourners to make the dead pass by our church,” De los Santos said.

Researcher Nina Tomen said there were no church documents in the Archdiocese of San Fernando that could explain the nine-day daun in Betis, a town of seven villages, which was annexed to Guagua in 1903. According to Consuelo Jose-Mendoza, 90, whose clan counts three papal awards, the daun has lost several old features.

The church has stopped displaying at the altar a large painting of souls being consumed by flames. This visual rendition of purgatory is said to have been introduced by Fr. Fidel Dabu, the parish’s first Filipino priest.Gone also is the “tumba” that used to be placed before the major altar. It consisted of a pile of two tables shrouded in black cloth. On top of this was a big crucifix of Christ.

The Masses back then were held at 5:30 a.m. and 6 a.m. After a Mass, the faithful held a slow procession from the church to the cemetery, reciting the “Decenario,” a long Kapampangan prayer for the dead. The cemetery gives a humorous but profound reality check. The arcs on the gates state: “‘Aku ngeni, Ika bukas’ (I’m dead now, you, too, will die tomorrow).”