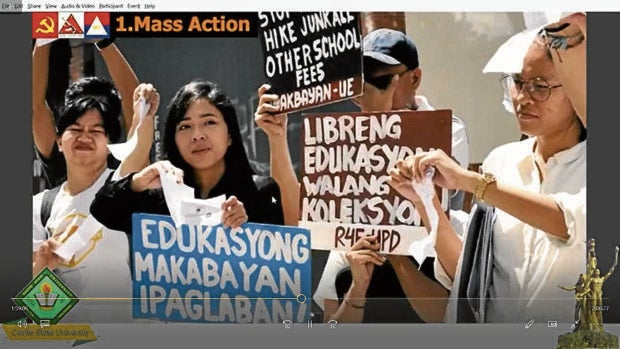 PROTEST A screenshot of a slide presented during a government webinar at Cavite State University shows students and members of youth organizations joining a rally protesting the increase in tuition and other school fees.

Remulla was the first local official to speak on the issue after student groups at Cavite State University (CvSU) in Indang town were branded communists in a school webinar held last Saturday.

In a webinar seen by more than 1,000 freshmen taking the National Service Training Program (NSTP), the Philippine Army said groups like the League of Filipino Students, Anakbayan and Kabataan party list group were brainwashing students into communism by urging them to “run away from and talk back and rebel against” their parents.

Parlade, who is also head of the military’s Southern Luzon Command, which has jurisdiction over Cavite, accused Remulla of merely relying on “third-hand” information and “malicious” news reports.

Parlade said the governor should also refrain from “threatening” him.

In a public post, Remulla said Parlade had accused celebrities Angel Locsin, Liza Soberano and Miss Universe 2018 Catriona Gray of being “communist supporters or sympathizers” when the women spoke about human and women’s rights.

“If you want to threaten the lives of public personalities, may I suggest that you try knocking out someone in the same weight class?” Remulla said.

“If you or any of your men put up similar posters or tarpaulins in the province of Cavite, they will not last a day! I will personally lead the effort to tear your propaganda posters down,” he added.

Parlade did not answer the Inquirer’s question whether the webinar came from the NTF-Elcac. But in a Viber message, he addressed Remulla by denying any hand in the posters that declared the Communist Party of the Philippines, New People’s Army and the National Democratic Front of the Philippines “persona non grata.”

“If it were me (behind those posters), I would have my name and office on them and I would even inform you. I am not [a] coward like others,” Parlade said.
CvSU student Jane Khrisha Sandigan of the student alliance Kilos Na said the webinar, titled SAFER (Strengthening Alliance on Fight Against Illegal Drugs and Terrorism) Cavite, was a blatant attack on activists.

The four-hour webinar included speakers from the Philippine Drug Enforcement Agency and the Philippine National Police, who talked about drug use problems and crime prevention, and Army Col. Erwin Alea, who tackled alleged rebel recruitment on the campus.

Alea also warned students against some professors, whom he did not name but claimed to be part of the communist movement.