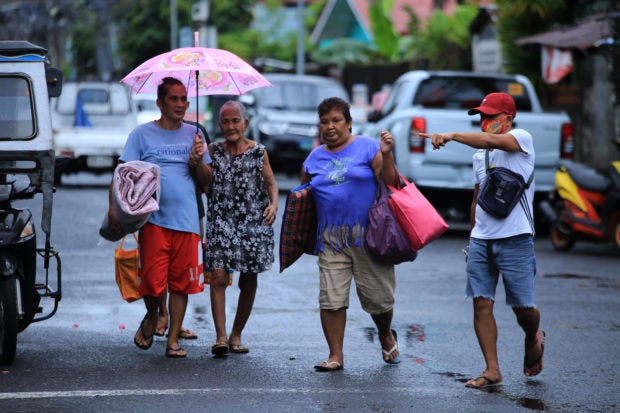 Residents evacuate from their home in the coastal area of Legaspi City, Albay province south of Manila on october 25, 2020, ahead of tropical storm Molave’s expected landfall. (Photo by Charism SAYAT / AFP)

LEGAZPI CITY—Thousands of residents were forced to evacuate as Tropical Storm Quinta (international name: Molave) poured rains over three regions in southern Luzon before making landfall in the easternmost tip of Bicol on Sunday night.

In a bulletin, the state weather bureau said the severe storm would likely intensify further before landfall.

As of Sunday afternoon, Quinta was estimated at 70 kilometers east-northeast of Legazpi City in Albay province, moving westward at 25 km per hour according to the Philippine Atmospheric, Geophysical, and Astronomical Services Administration.

It was packing maximum winds of up to 130 km per hour near the center and gusts of up to 160 kph.

Most of the residents evacuated were from areas prone to landslides, flash floods, storm surge, and lahar. As of Sunday late afternoon, the number of evacuees rose to 11,217 families or 47,646.

As of 5 p.m., tropical cyclone wind signal (TCWS) No. 3 was raised over Catanduanes, Albay, Sorsogon, Burias and Ticao Islands, and the eastern portion of Camarines Sur.

Camarines Norte, the rest of Camarines Sur, Masbate, the central and southern portions of Quezon, the southeastern portion of Laguna, Batangas, Marinduque, Romblon, Oriental Mindoro, Occidental Mindoro, including Lubang Island, and Northern Samar were placed under TCWS No. 2.

In Catanduanes, at least 71 families or 341 people were told to leave their homes in the towns of Pandan, Bato, Bagamanoc, Baras, and Caramoran, said disaster response official Jerry Beo.

In Albay, 1,127 families or 2,230 people in low-lying communities were moved to temporary shelters in the towns of Guinobatan, Malinao, Camalig, and Manito.

Cedric Daep, chief of the Albay Public Safety and Emergency Management Office, said the agency had directed all barangays to evacuate families living in areas that might be hit by floods amid the coming storm.

In Ligao City, Mayor Patricia Gonzalez-Alsua said the local government was “securing” 3,000 to 4,000 families that are threatened by flash flood, landslide, lahar flow, and storm surge in coastal areas.

In Libon, Mayor Das Maronilla said more than 27 flood-prone villages were being monitored as the Talisay, Morocmoc, and Quinale rivers started to swell.

Flash floods spawned by Quinta’s rains on Sunday morning submerged over a hundred houses in Cagbulacao, a low-lying village in Bacacay town on Cagraray Island, which is part of Albay.

In Calamba City and other parts of Laguna province, families also left their homes amid warnings of floods and landslides.

Aldwin Cejo, the provincial disaster response chief, said 11 families or 46 people had sought shelter in an evacuation site in Barangay Bucal, Calamba, as of 2 p.m. Sunday.

In Luisiana, a landslide occurred in San Antonio village, uprooting a large tree off a cliff. Cejo said the road had since been cleared.

Floods were also reported in Concepcion village in Lumban town and in Bakia village in Majayjay town.

More than 600 passengers have been stranded in ports in Bicol after sea travel was canceled since Saturday afternoon.

The Philippine Coast Guard in Bicol reported 127 stranded passengers in Albay, 31 in Masbate, and 519 in Sorsogon as of Sunday noon.

About 300 rolling cargoes, 37 fishing vessels, and two motor boats were not allowed to leave the ports.

Search and rescue personnel across Mindoro, Marinduque, Romblon, Palawan region were readied for deployment, according to the police regional command.

TWCS No. 1 was declared over the rest of Quezon, the rest of Laguna, Rizal, Cavite, Metro Manila, Bulacan, Pampanga, Bataan, the southern portion of Zambales and Calamian Islands in Luzon.