With time running out, Trump again forced to defend coronavirus approach at debate 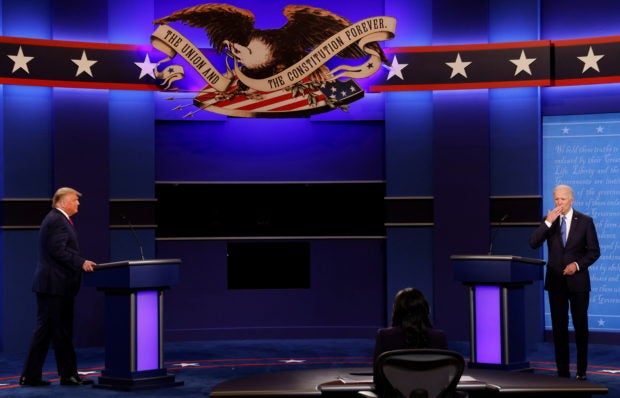 NASHVILLE — Democratic presidential candidate Joe Biden renewed his attacks on President Donald Trump’s handling of the coronavirus pandemic at Thursday’s final debate, seeking to bolster his lead in opinion polls with 12 days to go to the Nov. 3 election.

The televised encounter in Nashville, Tennessee, represented one of the Republican Trump’s last remaining opportunities to reshape a campaign dominated by a pandemic that has killed more than 221,000 people in the United States and devastated the economy.

“Anyone who’s responsible for that many deaths should not remain president of the United States of America,” Biden said.

Trump, who was far more restrained than at the first debate in September when he aggressively talked over Biden, defended his approach to the outbreak and claimed the worst of the pandemic was in the past.

“We’re rounding the corner,” said Trump, who has played down the virus for months. “It’s going away.”

Opinion polls show most Americans disapprove of the president’s response to the virus. Several U.S. states, including the election swing state of Ohio, reported record single-day increases in COVID-19 infections on Thursday, evidence the pandemic is accelerating anew.

Though Trump trails former vice president Biden significantly in national polls, the contest is much tighter in some battleground states where the election will likely be decided.

Biden leads Trump by eight percentage points in the latest Reuters/Ipsos national poll, conducted Oct. 20-22. His lead has narrowed slightly over the past few weeks and is back to where it was in September, before Trump was hospitalized with COVID-19.

Relatively few voters have yet to make up their minds, and Trump’s window to influence the outcome may be closing. A record 47 million Americans already have cast ballots, eclipsing total early voting from the 2016 election.

The first segment of the debate was far more civil than the candidates’ first clash in September, when Trump’s constant interruptions and exchanges of personal insults derailed the evening.

As a result, each candidate’s microphone on Thursday was switched off while his opponent made a two-minute introductory statement on a topic. Even after the microphones were turned back on during discussion periods, however, the candidates largely allowed each other to speak.

Biden faulted Trump for avoiding responsibility for the pandemic.

Trump claimed on Thursday that a vaccine was close to ready, saying approval would be announced within “weeks” before acknowledging that it was not a guarantee. Most experts, including administration officials, have said a vaccine is unlikely to be widely available until mid-2021.

Before the debate began, Trump’s campaign signaled that the often pugnacious president would attack Biden, 77, for not accomplishing more during his nearly half-century of public service and zero in on what Trump, 74, alleges were corrupt practices by Biden’s family.

Trump invited as his guest Tony Bobulinski, a former business associate of Biden’s son, Hunter, who claims to have evidence of business ties between the Biden family and a Chinese state-owned enterprise. He cooperated in an investigation by the Republican-led Senate Intelligence Committee, which last month said it found no evidence that Joe Biden exerted improper influence over American policy.

Trump has repeatedly accused Joe and Hunter Biden of unethical practices in China and Ukraine. No evidence has been verified to support corruption allegations, and Biden called them false and discredited.

Trump and his children have been accused of conflicts of interest of their own since he entered the White House in 2017, most involving the family’s real estate and hotel businesses in the United States and abroad.

Thursday’s surprise guest was reminiscent of a Trump debate with rival Hillary Clinton in 2016 in which he invited women who accused her husband, former President Bill Clinton, of sexual misconduct as guests. Trump has faced similar accusations, which he has denied.

Ahead of the debate, Biden aides said he needed to avoid allowing Trump to get under his skin with attacks on his family. One Biden adviser said aides wanted him to counter Trump without seeming un-presidential.

The contentious first debate, when the two men traded insults, was watched by at least 73 million viewers. Trump passed up another planned debate last week after it was switched to a virtual format following his COVID-19 diagnosis.

On Thursday, the commission that oversees the debate removed plexiglass barriers separating the candidates after Trump provided proof he had tested negative for COVID-19, a source familiar with the matter said.

The approximately 200 attendees had their temperatures checked before entering the venue, and everyone was required to wear a medical mask at all times.

Debate topics were to include the pandemic, race relations, climate change and national security. The Trump campaign argued that the entire debate should be focused on foreign policy.