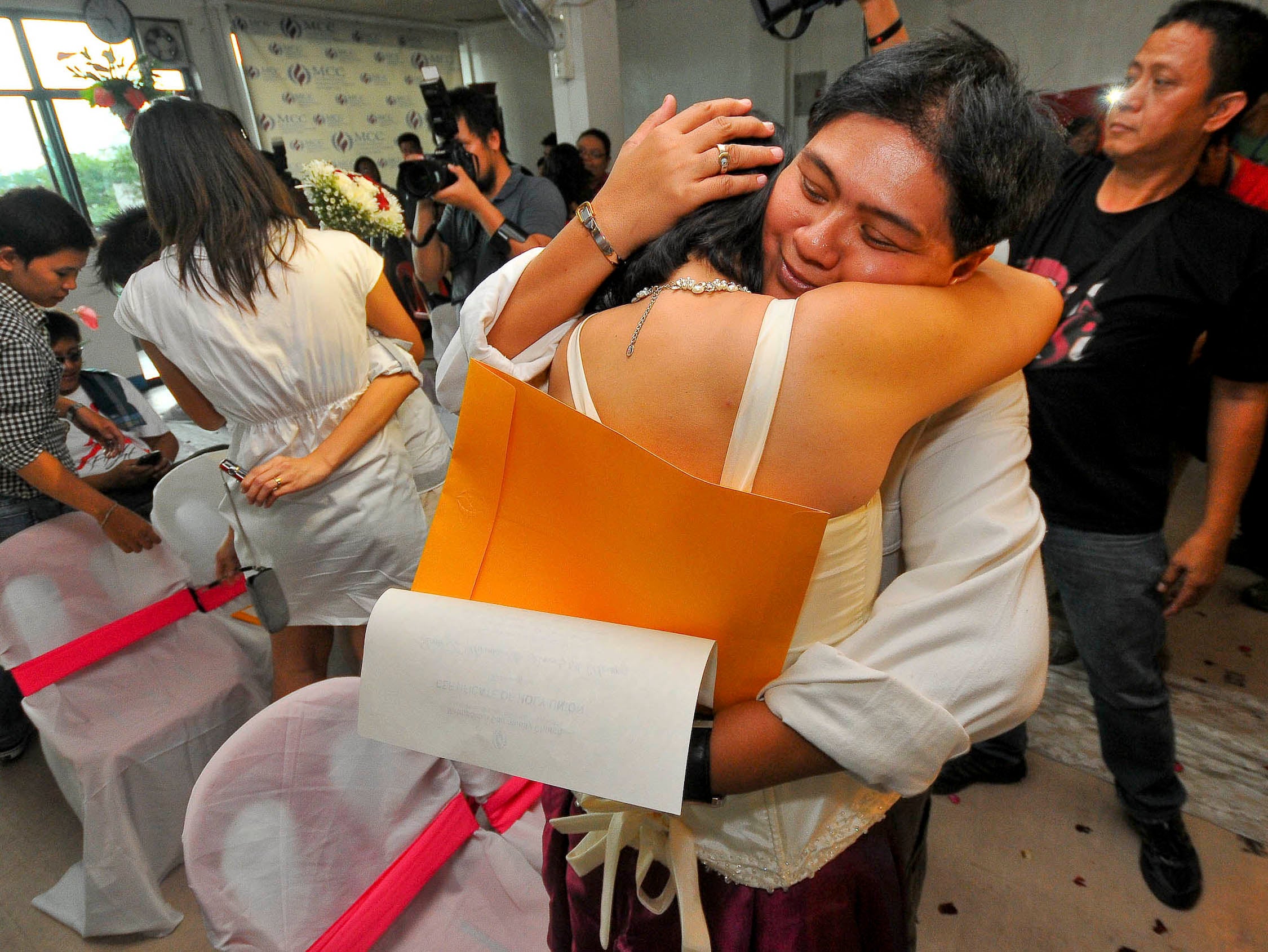 LEGAL PROTECTION Same-sex couples take part in a grand “holy union” wedding at the Metropolitan Community Churches in Quezon City. Members of the LGBTQ community have welcomed Pope Francis’ landmark support for same-sex civil unions, while several lawmakers hope that it will bring a “fresh push” for bills on the matter that are pending in Congress. —INQUIRER PHOTO

LGBTQ communities in the Philippines on Thursday welcomed Pope Francis’ landmark endorsement of same-sex civil unions, seen by many as a resounding break from thousands of years of Church doctrine on what constituted traditional marriage.

They also called on the Duterte administration, whose initial support for same-sex civil unions had flagged in recent years, to consider heeding the Pontiff’s signal.

In a television interview, Bahaghari national spokesperson Rey Valmores-Salinas said the Pope’s endorsement “was a huge thing by itself, [considering that] historically, the Catholic Church has been against LGBTQ (lesbian, gay, bisexual, transgender and queer) rights.”

In a documentary, “Francesco,” which was premiered on Wednesday at the Rome Film Festival, Francis reiterated his view that gay people were also children of God, and that there must be civil union laws for them to be legally covered.

But his opposition to gay marriage within the Church remains absolute.

The spokesperson for the Catholic Bishops’ Conference of the Philippines, Fr. Jerome Secillano, said he could not release any comment as he had yet to see the documentary.In Malacañang, presidential spokesperson Harry Roque said that like the Pope, the President also favored civil unions for same-sex couples.

“The President has said it over and over again—he is in favor of a law that will recognize civil union for those in same-sex relationships,” Roque said in his daily press briefing on Thursday.

Duterte has vacillated on his support for gay or same-sex marriage, which is not recognized under the country’s Family Code. He said the code must first be changed through legislation.In July 2018, after pollster Social Weather Stations published a survey showing that a majority of Filipinos were against legalizing same-sex marriage, Roque said that the President also opposed same-sex marriage but not civil union.

“With regard to [civil] union, the President is in favor of that so that same-sex couples can arrange various aspects of their relationship,” Roque said.“It’s a huge thing when the Pope himself recognizes the inalienable rights of the LGBTQ communities to form families still,” Salinas said. “We believe that a family is based on love and that unions of couples from the LGBTQ are valid just as much as the unions of straight couples.”

She urged the Philippine government to take Francis’ cue as head of the Catholic Church and to amend the country’s “dated” Family Code, which declares marriage to be between man and woman only.

“With Pope Francis sharing his thoughts about this issue, let us be optimistic that more legislators in the House and in the Senate become open and supportive to the objectives of House Bill (No.) 2264,” said the former Speaker, who authored the measure.

“Our LGBT brothers and sisters deserve to have protections, under the law, for their respective union with the person they choose to be their life partner,” he said.

HB 2264, or the “Civil Partnership Act,” remains pending on the House committee on women and gender equality.

Same-sex marriage is among the core issues that the LGBTQ community continues to fight for, it being the foundation of so many other rights that it currently does not enjoy. In existing laws, for example, same-sex couples do not have the same inalienable rights as straight couples when it comes to conjugal property and finances.

“There are so much being taken away from LGBTQ families expressly because the state does not recognize these unions, and I believe it’s time to change that,” Salinas said.

“The Philippines has always prided itself [on] being a Catholic nation. If the pope himself recognizes that it is a human right for an LGBTQ couple to form families, then our position as a Catholic country also demands that we recognize these couples’ inalienable rights,” she added.

“If Jesus Christ were here right now, I’m sure he would be the first to accept the LGBTQ community.”

Alvarez said the Pope’s remark “brings a fresh push” to the bill he filed, which seemed “to be stuck in the doldrums.”

“Just as he recognized and declared his support for this cause, I hope our colleagues in both chambers of Congress will be enlightened, too,” he said. “This is a good opportunity to reignite, once more, the conversation about the realities of existing relationships and the need to have a legal framework for this kind of human relations.”

Alvarez attributed the opposition to same-sex civil union to “members of our community with conservative views.”

“Is there really [a] reason to oppose civil unions based on conservatism? After all, if two persons choose to love, care for, support [and be faithful to] each other, and to have these rights, duties and obligations protected and enforceable by law, is this not conservatism too?” he said.

Bagong Henerasyon Rep. Bernadette Herrera said she hoped that the bills pending at the House would “finally move forward after being dormant for so long. She authored House Bill No. 1357, or “An Act Recognizing the Civil Partnership of Couples, Providing their Rights and Obligations.”

“The public support of Pope Francis for the enactment of civil union laws could be exactly the impetus needed so that opposition to the civil partnership bill will melt away,” Herrera said in a statement on Thursday.

His words could also revive the Sogie (sexual orientation and gender identity expression) bill, or the anti-discrimination bill, and other gender equality measures “which have encountered objections and violent actions from the conservative sectors of our society,” she added. —WITH REPORTS FROM JODEE AGONCILLO AND JEROME ANING