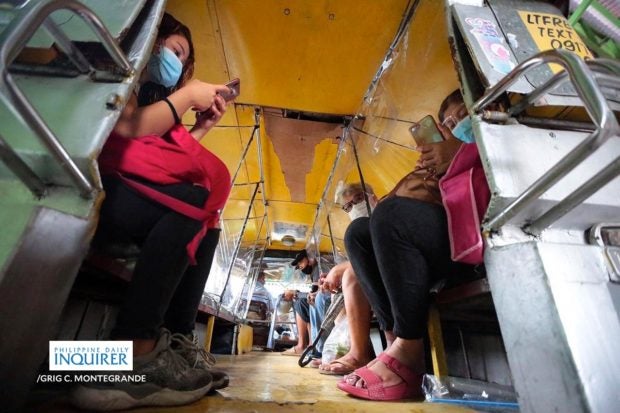 SWS explained in its report released Thursday that 27 percent of the respondents on the other hand considered the actions of operators as “inadequate,” while 13 are undecided.

The survey firm also looked into the reaction of people who own vehicles compared to those who commuted to move from one area to another.

SWS said that 44 percent of adult Filipinos do not own any type of vehicles, while the remaining 56 percent own at least one.  Of the vehicle owners, five percent own four-wheeled motor vehicles (cars, jeepney, e-jeep), 13 percent own three-wheeled vehicles (tricycle, e-tricycle), 32 percent with motorcycles and e-bikes, while 13 percent own bicycles.

Naturally, those who commute are less satisfied with the actions of transport operators compared to those who own vehicles — 57 percent who commute said that the measures are adequate, compared to 62 percent of vehicle owners who expressed the same views.

“The proportion of those who say the public transportation owners’ actions to prevent the spread of COVID-19 among their drivers and passengers are ‘adequate’ is slightly but significantly less among those who do not own any vehicle (57%) than among vehicle owners (62%),” SWS said.

Meanwhile, only 51 percent of adults in Metro Manila said that the transportation owners’ actions to avoid coronavirus transmissions were “adequate”, in comparison to 64 percent in Visayas, 62 percent in Mindanao, and 59 percent in Balance Luzon.

When Metro Manila transitioned into a general community quarantine last June, a huge concern among government officials was whether it was safe to let traditional jeepeneys operate, as passengers sitting close to each other would mean higher risks of contracting COVID-19.

This prompted authorities to temporarily disallow jeepneys from operating again, due to perceived risks.  But a think-tank firm insisted that traditional jeepneys might be safer since they do not use an air-conditioning system, which allows air to move freely in contrast to buses and new jeepneys with closed windows.

According to SWS, the survey results were obtained through mobile phone and computer-assisted telephone interviewing of 1,249 adult Filipinos.  These are then spread according to population projections, with 328 coming from Balance Luzon, 309 from Metro Manila, 312 from Mindanao, and 300 in Visayas

SWS said that they maintain a sampling error margin of ±3% for national percentages, ±6% for Metro Manila, ±5% for Balance Luzon, ±6% for the Visayas, and ±6% for Mindanao.