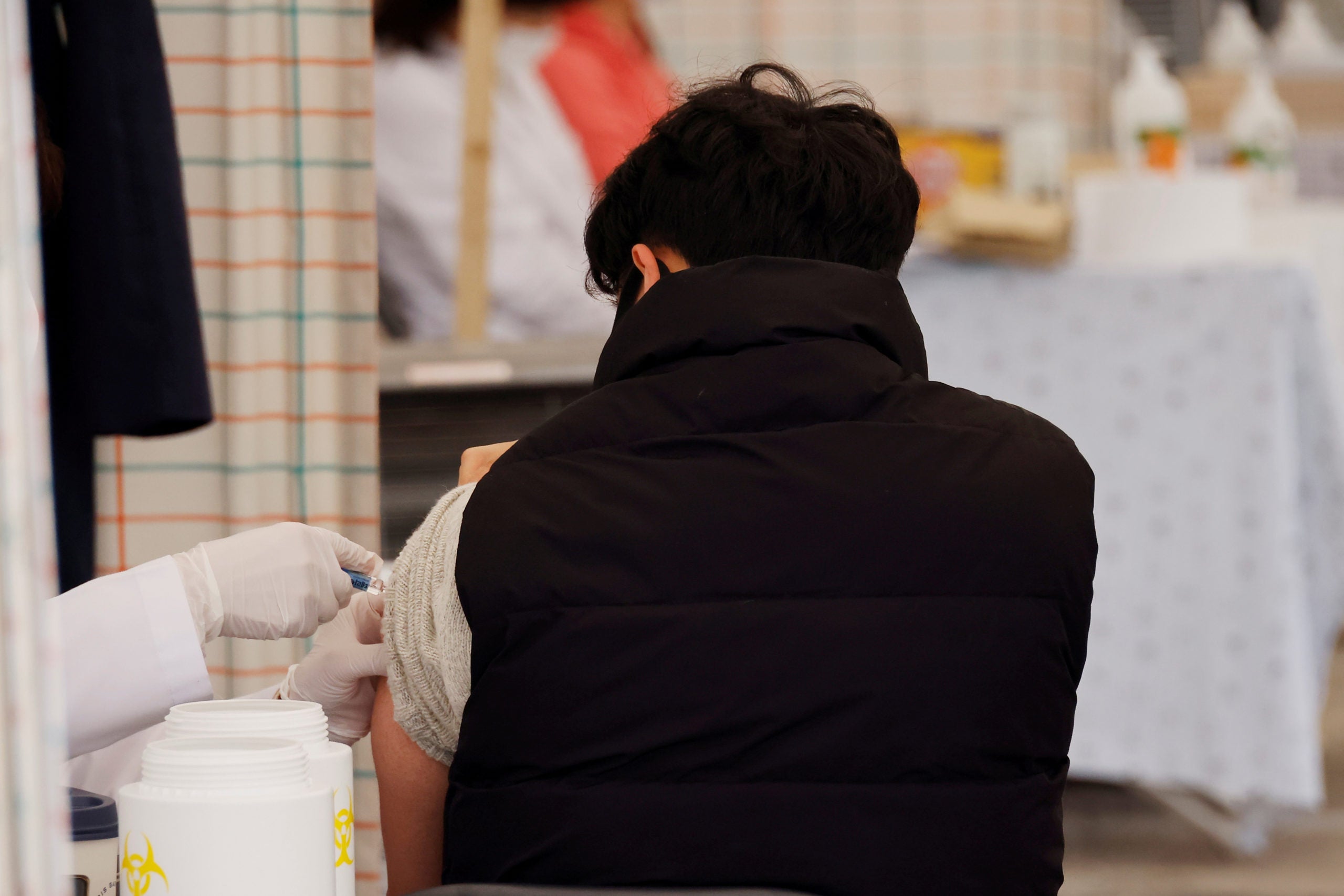 FILE PHOTO: A man gets an influenza vaccine at a hospital in Seoul, South Korea, October 21, 2020. REUTERS/Kim Hong-Ji/File Photo

SEOUL—South Korean officials refused on Thursday to suspend a seasonal influenza inoculation effort, despite growing calls for a halt, including an appeal from a key group of doctors, after the deaths of at least 25 of those vaccinated.

Health authorities said they found no direct links between the deaths and the vaccines.

At least 22 of the dead, including a 17-year-old boy, were part of a campaign to inoculate 19 million teenagers and senior citizens for free, the Korea Disease Control and Prevention Agency (KDCA) said.

“The number of deaths has increased, but our team sees low possibility that the deaths resulted from the shots,” the agency’s director, Jeong Eun-kyeong, told parliament.

South Korea ordered a fifth more flu vaccines this year to ward off what it calls a “twindemic,” or the prospect that people with flu develop coronavirus complications and overburden hospitals in winter.

“I understand and regret that people are concerned about the vaccine,” said Health Minister Park Neung-hoo, who confirmed the free program would go ahead.

“We’re looking into the causes but will again thoroughly examine the entire process in which various government agencies are involved, from production to distribution.”

They supply both the free program and paid services that together aim to vaccinate about 30 million of a population of 52 million.

Of the 25 dead, 10 received products from SK Bioscience, 5 each from Boryung and GC Pharma, one from Korea Vaccine and four from Sanofi.

All four domestic firms declined to comment, while Sanofi did not immediately reply to requests for comment.

It was not immediately clear if any of the vaccines made in South Korea were exported, or if those supplied by Sanofi were also being used elsewhere.

The Korean Medical Association, an influential grouping of doctors, urged the government to halt all inoculation programs for now, to allay public concerns and ensure the vaccines were safe.

Kim Chong-in, leader of the main opposition People Power party, wanted the program halted until the causes of the deaths were verified.

But health authorities have said a preliminary investigation into six deaths found no direct link to the vaccines, with no toxic substances uncovered.

KDCA data on Thursday showed at least seven of the nine people it investigated had underlying conditions.

The free program has proved controversial since it began last month. The launch had been suspended for three weeks after the discovery that about 5 million doses were kept at room temperature rather than being refrigerated, as required.

Officials said 8.3 million people had been inoculated since the program resumed on Oct. 13, with about 350 cases of adverse reactions reported.

A separate paid program allows buyers to pick from a larger pool of firms that make free vaccines and others.

The most deaths in South Korea linked to seasonal flu vaccinations was six in 2005, the Yonhap news agency said. Officials have said comparisons to previous years are tough, since more people are taking the vaccine this year.

Kim Myung-suk, 65, is among a growing number of South Koreans who decided to pay for a vaccine of their choice, despite being eligible for a free dose.

“Though just a few people died so far, the number is growing and that makes me uneasy,” she told Reuters in the capital, Seoul. “So I’m getting a shot somewhere else and will pay for it.”