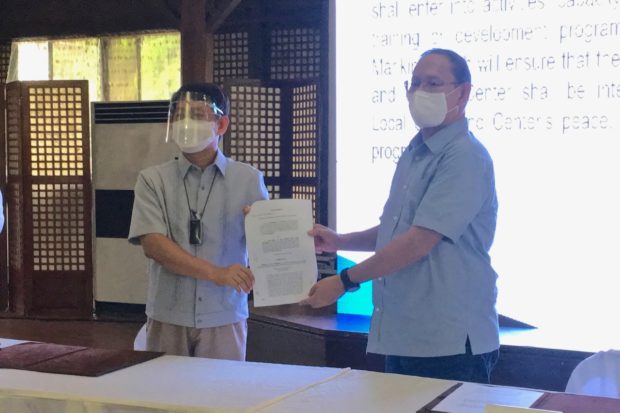 MANILA, Philippines — Marikina City’s local government unit has signed a deed of usufruct with the Department of the Interior and Local Government (DILG) and two of its attached agencies, which would allow the national government to build facilities on lands owned by the city.

During a ceremony on Wednesday, Marikina Mayor Marcelino Teodoro together with Interior Secretary Eduardo Año, and officials of Bureau of Fire and Protection (BFP) and Bureau of Jail Management and Penology (BJMP) signed the deed, which would give BJMP and BFP the temporary rights to use the properties.

(I am greatly thankful for Mayor Marcy for helping DILG and its agencies widen its coverage and strengthen the programs of the national government.)

(Marikina’s LGU leading the way in crafting ways to ensure the security of our people is a big thing.  And this city appears to be always engaged in programs, like the previous launching of DILG programs like Disiplina Muna and Bida ang may Disiplina.)

But Teodoro believes that not only DILG, BJMP, and BFP would benefit from the agreement, as it would help the city government work hand-in-hand with the national government in solving several issues like traffic, criminality, and disaster.

“Today, we are making history for our citizens, not only here in Marikina, more importantly for our country. Today, we will enter the mutually beneficial usufruct agreement,” he said.

(The agreements that gave usufruct rights to BJMP, BFP, and DILG were not only geared at allowing them to construct facilities, but also to help them operate regional and national facilities in these Marikina lands.)

DILG plans to build the Safe Philippine National Command and Control Center on a lot provided by the local government of Marikina.  According to Año, this project — a flagship project of President Rodrigo Duterte — aims to address problems like threats to public safety like “criminal acts, terrorist attacks, fire incidents, traffic congestion, and road accidents” with a state of the art technology.

This facility would be built in Barangay Nangka, on a 3, 425 square-meters of land.

BFP’s project on the other hand would center on a National Capital Region office, a Marikina Central Fire Station, a BFP Training Center and Museum on a different parcel of land in Barangay Nangka, this time measuring 13, 067 square-meters.

The training center would allow BFP to train better personnel, for greater knowledge in firefighting, emergency medical services, search and rescue, and other operations.

BJMP would also construct its jail facility in Barangay Nangka with total lot area of 8, 993 square meters — in adherence to the minimum requirements set by the United Nations on the treatment of prisoners.

“With activated command center, BFP will be able to scale up its rapid response in times of emergencies while BJMP will further improve its capability in jail decongestion and reformation efforts,” Año said.

“With the inking of partnership among Marikina LGU, the BFP, the BJMP, I am optimistic that we can shore up the capabilities of public safety institutions in terms of reducing criminality and improving the management of fire services, jail services, disaster risk reduction, and traffic,” he added.