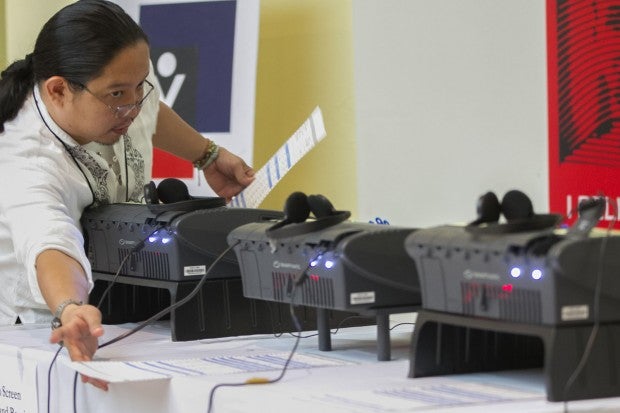 In this January 25, 2016 photo, a Comelec employee demonstrates how to use the then-new Vote Counting Machines (VCM) at the Pope Pius XII conference hall as part of the Comelec’s roadshow to showcase the VCM’s new security features. INQUIRER PHOTO/ ALEXIS CORPUZ

MANILA, Philippines — The slash in the Commission on Elections’ (Comelec) 2021 budget may force the poll body to use refurbished vote-counting machines (VCMs) instead of buying new ones for the 2022 national elections.

This surfaced during a Senate budget hearing Thursday, as discussions revealed that the Department of Budget and Management (DBM) reduced Comelec’s proposed P30 billion budget for next year to P14.56 billion.

According to Comelec Chairman Sheriff Abas, they had planned to procure new VCMs for the 2022 elections but the budget cut would lead them to just refurbish the VCMs utilized in the 2016 and 2019 elections and use those in the upcoming polls.

(Our plan is either we lease a new machine or we refurbish old machines.)

(Our budget for leasing machines, which was P30 billion, was rejected by the DBM. So our fallback is to refurbish the 2019 and 2016 VCMs.)

He assured, however, that the refurbished VCMs will be in good working condition although he also admitted that it would be better if new VMCs will be used for the elections in 2022.

(The functionality of the old and new machines are the same.)

Comelec also planned to buy additional VCMs for the 2022 elections to address the expected increase of voters. Comelec likewise wanted to reduce the number of voters from 1,000 per polling precinct to just 800 but this will not be feasible due to the budget reduction.

Comelec said it is expecting 65.3 million registered voters to participate in the 2022 polls.