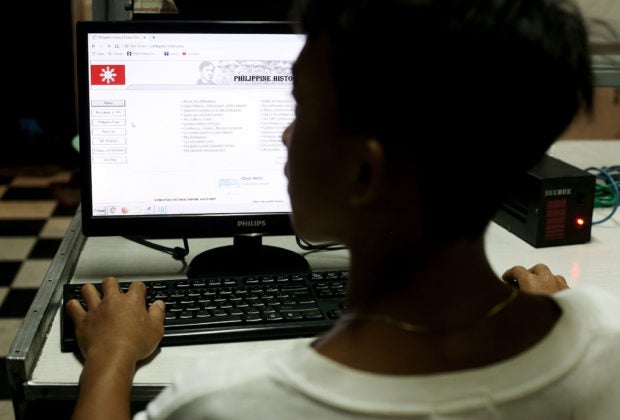 A boy uses a computer in Manila.
(File photo by RICHARD A. REYES / Philippine Daily Inquirer)

MANILA, Philippines — The National Union of Students of the Philippines (NUSP) accused the Department of Education (DepEd) of trying to avoid accountability for the challenges posed by distance and blended learning on the mental health of students and teachers.

The NUSP was referring to a DepEd statement issued on Tuesday asking the public not to immediately link cases of self-harm and suicide with the current educational systems — which were adjusted to avoid coronavirus transmissions — as a form of respect for grieving families.

“We have received reports from those concert, even reports from the families, and the initial investigation of the cases showed that none of the cases whatsoever point to distance learning as the primary cause of these [incidents],” the DepEd statement said in Filipino.

“The Union agrees with DepEd that suicide is a sensitive and complex issue,” the NUSP said in its reaction statement on Wednesday. “However, DepEd neither expounded nor expressed any measures and plans to help ease the burden of online and modular learning. Instead, the department’s first response was to wash their hands from being accountable for their failures.”

“Releasing such statement now when reports of suicide and mental health problems have been rising since months ago only proves their detachment to the students and teachers’ struggles and non-existent intention to act on the education plight amid the pandemic,” the NUSP added.

But NUSP noted it might also be insensitive to ask the public to stop discussing and connecting suicide cases to distance learning when some of the incidents showed indications of being connected to the online classes.

The youth group Samahan ng Progresibong Kabataan (Spark) echoed the same sentiments, noting that loss of life could have been avoided had DepEd admitted being unprepared for online classes.

“They knew that there was insufficient funding, that poor internet connection was outside their control, and that the modules weren’t ready, that quality education could not be ensured under their new modalities, that both teachers and students will be subjected to mental stress and yet they insisted on resuming classes,” Spark spokesperson Justin Dizon said in a statement.

“The youngest victims were aged 11. How can anyone look at this and still say that the system works, that the DepEd prepared well to avert these unfortunate events?” he asked.

This is not the first time that students slammed DepEd over suicide incidents allegedly linked to online classes.

CEGP was alluding to an earlier remark from Briones, who called the reopening of classes a “victory” against the COVID-19 pandemic.

She later retracted the statement, saying her remark was for those advocating an academic freeze, or a total suspension of the current school year.

The groups also noted that those using modules might also need to use gadgets and the internet once in a while.

“The state remains oblivious to the fact that the Filipino people need comprehensive reform on mental health, one that also addresses the social determinants of mental health struggle, to prevent unfortunate deaths and the prevalence of mental illness,” the NUSP said.

“We are one with the people as they weep and demand accountability. We call on them to address the students’ demands,” it added.

COVID-19 will have a long-tail effect on mental health, experts predict