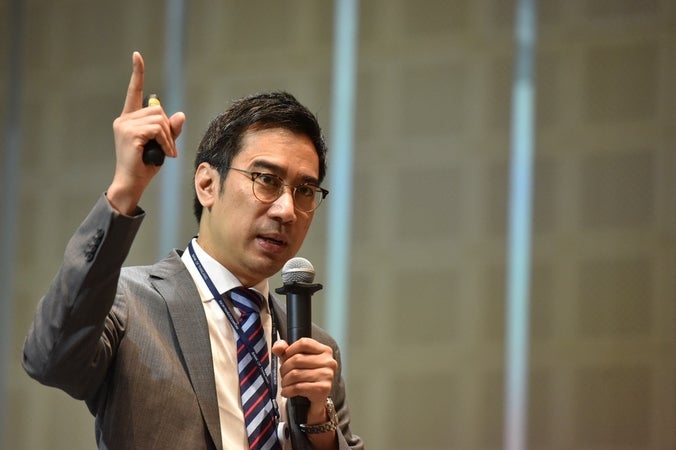 Bank of Thailand governor Sethaput Suthiwartnarueput meets the press for the first time on Tuesday after recently taking leadership at the central bank. THE NATION

BANGKOK — New central bank governor Sethaput Suthiwartnarueput said he is concerned about the ongoing political unrest, but added that the economy is resilient enough to survive any shock.

The central bank has forecast that the economy will contract 7.8 percent this year and will only start expanding in the second quarter of next year.

“It [the political unrest] will affect consumption, investment and confidence,” he said at his first press meeting on Tuesday.

“And problems with actual execution of policies will make things tougher,” he said referring to the government’s usual difficulty with policy execution rather than planning.

Anti-government protesters have intensified their rallies across the country demanding that the government step down, while the government has responded with crackdowns on protest leaders and censorship of the press.

Businesses, meanwhile, are worried that the state of emergency imposed by the government will have an adverse impact on the economy.

Thailand’s economy has already been crippled by the Covid-19 outbreak and taking far too long to recover.

“The state of the economy now can be compared to a patient who is slowly coming out of intensive care,” he said.

The outbreak resulted in a sharp drop of tourists from about 40 million to 6.7 million, which translated to an income loss of 10 percent of the gross domestic product. Thai exports in the second quarter shrank to the lowest level in 11 years, like a gravely ill person who needs intensive care, he continued.

Recovery, he said, is uneven among different sectors and the economy will take at least two years before it returns to pre-Covid levels, especially since it is still uncertain when a vaccine will be available and how much the tourism sector will recover.

In a bid to adapt to the changing environment, the Bank of Thailand (BOT) has recently shifted its policy from providing blanket financial aid to a more targeted, comprehensive and flexible scheme, he said.

However, he said, there are no new measures planned.

He also voiced confidence that the Thai economy is resilient to shocks brought on by the virus or other factors.

“The public debt is manageable, the country is financially stable and the labour market is flexible,” he said.

As for the strengthening of the baht, he said this was due to the high current account surplus, which comes in at US$30 billion (Bt938.3 billion) annually.

He said Thailand is not able to recycle this money for investment overseas because few Thai listed companies are investing abroad. This is unlike South Korea and Taiwan, which have been successfully recycling their large current account surplus by investing overseas.

Over the past five years, BOT has learned that external factors such as the US dollar and regional currencies account for 85 percent of the impact on the baht exchange rate, while domestic factors represent only 15 percent. Hence, the central bank is not able to have much of an influence on the currency’s exchange rate.

Thai exporters have long complained that a stronger baht is eroding their competitiveness, and have recently suggested that the currency be brought down to Bt34 against the dollar from the current rate of Bt31.

When asked how the central bank will help boost economic growth, he admitted that the fiscal policy was the key driver with the monetary policy playing a supporting role.

Thailand is among few countries in Asia to have brought its policy rate down to 0.5 percent, which is so low that it leaves limited room to bring it down further.

Sethaput said as central bank governor, he faces five key challenges, with the most important one being solving the debt crisis so households and businesses can survive and recover from the Covid-induced crisis.

The second is to maintain financial stability to support recovery, third is ensuring a stable macroeconomic level, so it is resilient to the impact of coronavirus and the fourth is to enhance public confidence. He said the fifth challenge is to ensure BOT works as a unified entity because it is fragmented and has so many small departments that its potential is restrained.

He said he will take a performance-based approach, allowing everyone to work together and deliver a good outcome.