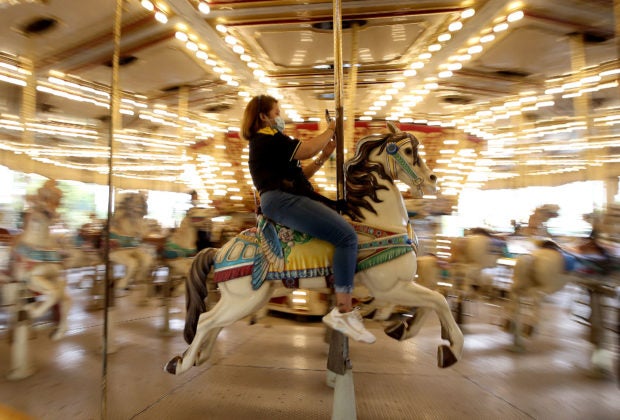 FUN IS BACK Amusement park rides are whirring back to life as Enchanted Kingdom, one of the leading attractions in Laguna, welcomes a limited number of weekend visitors after seven months of closure due to the pandemic. Museums, resorts and other outdoor destinations in the province have also resumed operations after quarantine restrictions are eased. —RICHARD A. REYES

The popular amusement park Enchanted Kingdom in Santa Rosa City in Laguna province welcomed a small crowd of weekend visitors last week after seven months of closure due to the pandemic.

But there was more to its reopening than the size of crowd or regaining lost income; it was about bringing back confidence in the province as it prepares to resume business amid a raging health crisis brought about by the coronavirus pandemic.

Elsewhere in Laguna, private resorts, heritage sites and natural tourist destinations have also been given the go signal by the government to reopen since the province, with 14,034 COVID-19 cases as of Oct. 18, was placed under a more relaxed quarantine in October.

Tourist arrival, however, was sluggish.

“We’re doing it gradually. Tourists are also testing the waters to see how safe it is for them to travel [during this time],” Marites Castro, operations chief officer of the Department of Tourism (DOT) in the Calabarzon (Cavite, Laguna, Batangas, Rizal and Quezon) region, said on Monday.

Mario Mamon, Enchanted Kingdom chair and president, said only about 200 people showed up on Saturday, among them Cavite resident Jake Villa, 25, who just happened to be in the vicinity with his girlfriend and decided to check out the park.Others were a group of friends from Sampaloc, Manila, celebrating a birthday and a young couple from Pasay City on a date. The rest were mostly vloggers (video bloggers) and media photographers.

Theme parks and even smaller carnivals were also shuttered as the government restricted large gatherings and nonessential movement.

“Nakakapanibago (It felt different). It was like we rented the entire place to ourselves,” Villa said in a phone interview.

He said rides in enclosed venues were still closed, while park personnel regularly sanitized the railings, seats and safety buckles. They also had to constantly wear their face mask and face shield.

Mamon declined to disclose the park’s losses but considered the entire year “written off.”

“Incidentally, it was also our silver anniversary this year,” he said, adding that the pandemic dampened the park’s “record-high” tourist arrival of 1.9 million in 2019.

In June, the DOT said Calabarzon lost P113.7 million, but the amount could be higher as it computed losses in the remaining quarters of the year, Castro said.

Following government guidelines on crowd limit, Enchanted Kingdom allows only 8,500 guests at a time, or half its regular capacity. It encourages them to prebook tickets online.

“What’s important is we’re still here,” Mamon said. He said none of the park’s close to 500 employees were laid off.

The park, one of the most popular weekend destinations for Metro Manila and Calabarzon residents, will be open only on weekends, from 10 a.m. to 6 p.m. but daily operations will begin on Dec. 14 until Jan. 3, 2021, in time for the Christmas holidays.

Castro said that aside from Enchanted Kingdom, many private resorts and hot springs in Calamba City, the heritage site in Pila town, lake activities in San Pablo City, and the natural resorts and outdoor destinations in Rizal, Pakil, Nagcarlan, Liliw and Lumban towns had also resumed operations. INQ