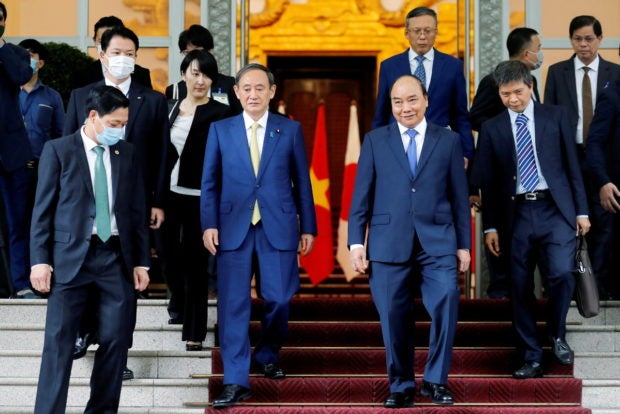 HANOI/TOKYO－Yoshihide Suga, in his first overseas trip as Japanese prime minister, agreed with his Vietnamese counterpart to step up military and security cooperation.

In talks in Hanoi on Monday, Suga and Nguyen Xuan Phuc struck a basic agreement allowing Japan to export military equipment and technology to Vietnam. Japan has been pursuing such agreements in recent years to bolster ties with Southeast Asia and sustain its own industry on military supplies.

Suga arrived in Hanoi late on Sunday. He said his four-day trip to Vietnam and later Indonesia is key to pursuing the “free and open Indo-Pacific” vision for multilateral economic and security cooperation.

In August, Vietnam agreed to buy six coast guard patrol boats worth $345 million from Japan to increase its maritime capacity.

Some observers believe that Suga’s choosing the two Southeast Asian countries is intended to strengthen Japan’s relations with members of the Association of Southeast Asian Nations and help revive the Japanese economy. It is expected that Suga’s government will largely follow Abe’s foreign policy in the near term.

For the first overseas trip of Japanese prime ministers, traditionally, close ally the United States had been the top destination and alternatively, the host country of an international event they attended, the observers said.

However, with the COVID-19 pandemic raging around the world, international conferences have mostly gone online instead. Meanwhile, the US is obviously not a good choice with the presidential election coming.

Vietnam is this year’s Asean chair and it hosts many Japanese businesses, while Indonesia is the most populous Asean country and like Japan, a member of the Group of 20 major economies. Both of them have strong influence within Southeast Asia.

According to local media, Suga is eager to beef up ties, especially in security affairs, with Asean countries, and further bring them under the framework of the so-called Indo-Pacific strategy that the US and Japan have pushed for.

Vietnam and Indonesia were also the first overseas destinations for Abe after he became Japan’s prime minister for the second time in December 2012. The visits reinforce the view that Suga is also expected to follow the steps of his predecessor on foreign policy.

Japanese officials hope that Suga’s visit will result in technical trainees from the two countries going to Japan as soon as possible and help with its economic recovery.

Japan’s official data showed that there were about 410,000 foreign technical trainees in Japan by the end of 2019, with Vietnam being the largest source with about 220,000. Indonesia was also among the top countries in terms of the number of foreign trainees.

The COVID-19 pandemic has left a large number of foreign trainees stuck in their home countries, leading to severe labor shortages in agriculture, manufacturing, construction and other industries in many parts of Japan.

Suga, who positioned himself as the continuity candidate in the race to succeed Abe, has vowed to continue much of Abe’s foreign policy, saying that he will base his policies on the alliance with the US and promote a “free and open Indo-Pacific strategy”, while working for stable relations with neighbors including China and Russia.