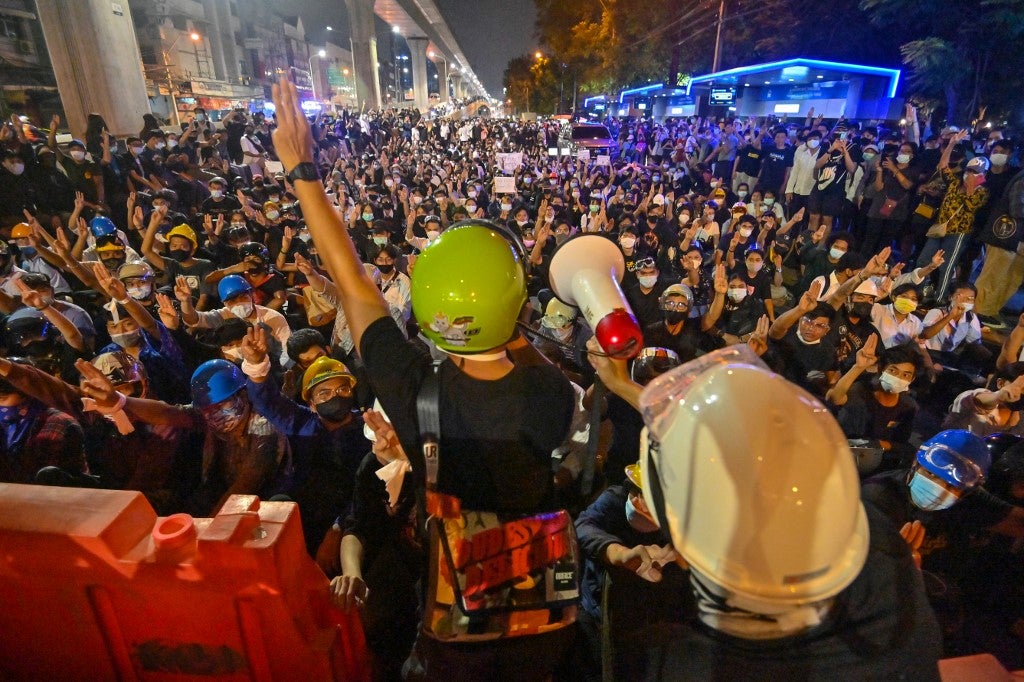 A pro-democracy protester uses a loudspeaker to talk to the crowd and gives the three-finger salute during an anti-government rally at Kaset intersection in Bangkok on October 19, 2020, as they continue to defy an emergency decree banning gatherings. (Photo by Mladen ANTONOV / AFP)

BANGKOK, Thailand — Umbrellas as shields, secure chat groups and hand signals as warnings of a pending police crackdown — Thailand’s pro-democracy protesters have taken inspiration and lessons from their counterparts in Hong Kong.

Images from Bangkok over the weekend of activists in hard hats, goggles and gas masks facing off against the police were strongly reminiscent of the methods used last year by Hong Kong protesters.

And to counter a more forceful crackdown by the police, Thai activists have also mimicked Hong Kong’s flashmob rallies and guerrilla, “be water” tactics — a philosophy attributed to martial arts hero Bruce Lee.

“Now we’re like a fast-moving current that’s ready to change direction at any minute,” said Panumas “James” Singprom, co-founder of Free Youth, one of the Thai movement’s main groups.

“The state has pressured us to adapt fast.”

Thai protesters have defied warnings and gathering bans to sustain their movement, which has drawn tens of thousands to the streets in recent months, demanding reforms to the government and the powerful monarchy.

And to avoid surveillance and arrests, like their Hong Kong counterparts, they have relied on encrypted messaging services such as Telegram to coordinate protests — only receiving the planned locations an hour before each rally.

While the Thai movement has seen some prominent faces emerge, ongoing arrests have forced protesters to replicate another Hong Kong movement feature — organising with no obvious leaders, and using hashtags to spread their message.

The majority turning up for the daily protests are “self-organised”, said James.

The camaraderie between Hong Kong and Thailand protesters was on display in Bangkok on Sunday, with demonstrators chanting “return independence to Hong Kong, while raising mobile flashlights to the night sky.

And much like the sea of raised hands in Hong Kong — signifying the protesters’ five demands — Thai rallies have seen waves of three-finger salutes borrowed from the Hunger Games movies.

Advice and support have poured in from young activists in Hong Kong and Taiwan — dubbed the “Milk Tea Alliance” on social media because of the popularity of the drink in all three places.

As images of Thai police using water cannon on unarmed protesters went viral, Hong Kong activists shared tips on how to handle such a situation.

One Hong Kong Twitter user named Crystaljel recommended using umbrellas as shields and carrying saline water, and added: “Make good use of your talent and courage.”

Passing dozens of colourful umbrellas to those on the frontline, they attempted to create a human defence wall as riot police bore down on them.

Protesters also formed human chains during the Sunday protest to pass messages and supplies — including hard hats, goggles and water — to those lacking protection.

Much like the so-called “braves” in Hong Kong, Thailand also saw groups of self-appointed frontline protesters over the weekend, who moved forward in the crowd when rumours emerged of a crackdown.

“I want to do more than just participate in the protest,” said a 23-year-old university student, asking not to be named.

“This is the time to step up and protect our friends.”

Despite the similarities, however, Hong Kong has not seen deadly state crackdowns of the kind Thailand has witnessed in the past against democracy movements.

One user on Hong Kong’s Reddit-like forum, LIHKG, quipped it was unnecessary for Hong Kong to teach Thais how to protest.

“They had more coups than you’ve had meals,” he wrote.

“When they used grenades in 2014, you were still singing protest songs.”