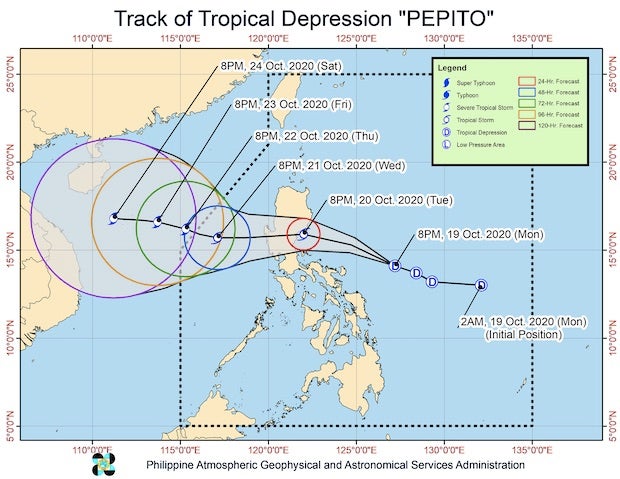 The track of Tropical Depression Pepito as of late Monday night. (Image from PAGASA)

MANILA, Philippines — More areas in Luzon, including Metro Manila, were placed under Tropical Cyclone Wind Signal No. 1 as Tropical Depression Pepito maintained its strength while moving closer on Monday, according to the Philippine Atmospheric, Geophysical and Astronomical Services Administration (Pagasa).

Pepito was still packing maximum sustained winds of 55 kilometers per hour near the center with a gustiness reaching up to 70 kph.

The following areas were placed under Signal No. 1, which means that wind of 30 to 60 kph may be felt in the next 36 hours:

As of 10:00 p.m. on Monday, Pepito was last located 305 kilometers east of Virac, Catanduanes.  It was still moving west-northwest at 20 kph.

Pepito may progress as a tropical storm before making landfall, although there’s still a slim chance that it will cross the Luzon landmass as a tropical depression and then intensify once it reaches the West Philippine Sea.

Pepito may be within 45 km south-southwest of Casiguran in Aurora by Tuesday evening and may cross the Luzon by Wednesday and move to 350 km west of Dagupan, Pangasinan later that day.

Due to the storm’s movement, moderate to heavy rains will be felt over Bicol Region, Northern Samar, Quezon, Aurora, Cagayan, and Isabela starting until Tuesday morning.

Meanwhile, light to moderate with at times heavy rains will be experienced over Metro Manila, Calabarzon, Cordillera Administrative Region, the rest of Cagayan Valley, Central Luzon, Zamboanga Peninsula, Bangsamoro, Northern Mindanao, Caraga, Samar, Eastern Samar, Romblon, and Marinduque, due to combined effects of the weather disturbance and the southwest monsoon.

Strong to near gale winds may also prevail under Signal No. 1, while the northeasterly surface wind flow may bring the same conditions in Batanes, Babuyan Islands, and the coastal and/or mountainous areas of mainland Cagayan, Apayao, Ilocos Norte and Ilocos Sur.

The same scenarios may occur in Visayas and Mindanao, with Cebu and Tacloban feeling temperatures of 25 to 29ºC and 24 to 32ºC in Zamboanga and Davao.

A gale warning remains raised over the seaboards of Batanes, Cagayan, Ilocos Norte, Ilocos Sur, and Isabela due to rough to very rough seas brought by Pepito and the northeasterly surface wind flow.