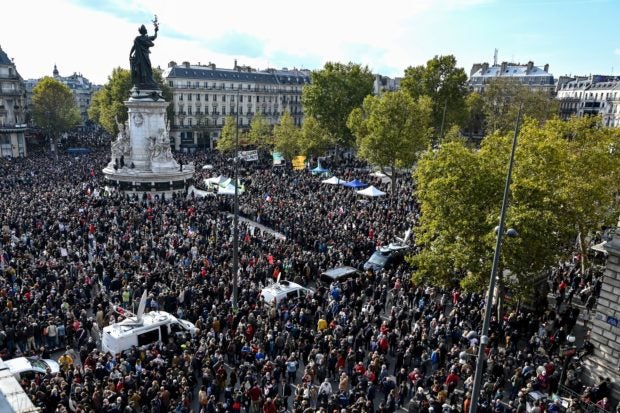 People gather on Place de la Republique in Paris on October 18, 2020, in homage to history teacher Samuel Paty two days after he was beheaded by an attacker who was shot dead by policemen. – Thousands of people rally in Paris and other French cities on October 18, 2020, in a show of solidarity and defiance after a teacher was beheaded for showing pupils cartoons of the Prophet Mohammed. His murder in a Paris suburb on October 16 shocked the country and brought back memories of a wave of Islamist violence in 2015. (Photo by BERTRAND GUAY / AFP)

Paris, France — French police on Monday raided the homes of dozens of suspected Islamist militants three days after the beheading of a teacher who had shown his pupils cartoons of the Prophet Mohammed, the interior minister said.

The raids came a day after tens of thousands of people took part in rallies countrywide to honor slain teacher Samuel Paty and to defend freedom of expression.

Gerald Darmanin said the swoop on Islamist networks was designed to send a message that “enemies of the Republic” would not enjoy “a minute’s respite”.

He said over 80 investigations had been launched for online hate speech following the attack, which has drawn parallels with the 2015 massacre at Charlie Hebdo satirical magazine, where 12 people were gunned down for publishing the Mohammed cartoons.

That attack — the first in a string of assaults that have killed over 240 people in France — brought over a million people onto the streets of Paris to denounce extremism.

On Sunday, people again congregated on Place de la Republique in Paris, where world leaders had marched alongside the French in 2015.

Some in the crowd chanted “I am Samuel”, echoing the 2015 “I am Charlie” rallying call by supporters of free speech.

Paty, 47, was murdered on his way home from the school where he taught in a suburb northwest of Paris on Friday afternoon.

A photo of the teacher and a message confessing to his murder was found on the mobile phone of his killer, an 18-year-old Chechen man Abdullakh Anzorov, who was shot dead by police.

Eleven people are being held over the attack, including a known Islamist militant and the father of one of Paty’s pupils who had railed against him online and called for his dismissal.

Darmanin accused the two men of having issued a “fatwa” against Paty, using the term for an Islamic edict that was famously used to describe the 1989 death sentence handed down against writer Salman Rushdie by Iran’s Ayatollah Khomeini.

“They apparently launched a fatwa against the teacher,” the minister told Europe 1 radio.

Anzorov’s family arrived in France when he was six from the predominantly Muslim Russian republic of Chechnya.

Four members of his family, which sought asylum in France, are being held for questioning.

Paty, who has been eulogized by pupils and parents as a dedicated teacher, had been the target of online threats for showing the Mohammed cartoons to his civics class. 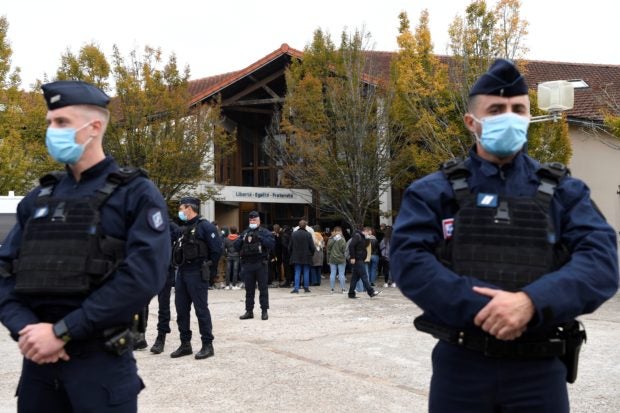 French police officers stand as adults and children gather in front of flowers displayed at the entrance of a middle school in Conflans-Sainte-Honorine, 30 kilometers northwest of Paris, on October 17, 2020, after a teacher was decapitated by an attacker who has been shot dead by policemen. (Photo by Bertrand GUAY / AFP)

Depictions of the prophet are widely regarded as taboo in Islam.

According to his school, Paty had given Muslim children the option to leave the classroom before he showed the cartoons, saying he did not want their feelings hurt.

A national tribute is to be held for Paty on Wednesday.

French authorities have also said they would pursue the authors of some 80 online messages of sympathy for Anzorov, and step up security at schools when pupils return after half-term.

On Sunday, demonstrators on the Place de la Republique held aloft posters declaring: “No to totalitarianism of thought”, and “I am a teacher”.

“You do not scare us. We are not afraid. You will not divide us. We are France!” tweeted Prime Minister Jean Castex, who joined the Paris demonstration.

Friday’s attack was the second of its kind since a trial started last month over the Charlie Hebdo killings.

The magazine republished the controversial cartoons in the run-up to the trial, and last month a young Pakistani man wounded two people with a meat cleaver outside Charlie Hebdo’s former office.

Read Next
‘Alarming’: Cagayan hit by 143 new COVID-19 cases, including those of 17 cops in 1 town
EDITORS' PICK
Kalinga, Ifugao, Mt. Province, N. Samar will be under Alert Level 4 from Jan 21-31
Gear up and get ready to play with Yamaha Mio Gear
Mobile COVID-19 vaccination for commuters, transport workers set at PITX
Acer starts the year off strong with the Aspire Vero National Geographic Edition
Municipal court in Pangasinan sets arraignment for ‘Lolo Narding’
31,173 new COVID-19 cases push PH’s active tally to 275,364
MOST READ
Imelda Marcos trends on Twitter after octogenarian jailed for allegedly stealing mangoes
SSS: Members on home quarantine due to COVID-19 can apply for sickness benefit
Villar backs implementation of EDSA decongestion blueprint
Help pours in for octogenarian jailed for ‘stealing’ mangoes in Pangasinan
Don't miss out on the latest news and information.