From Zoom funerals to farewell parties: Saying goodbye during the pandemic 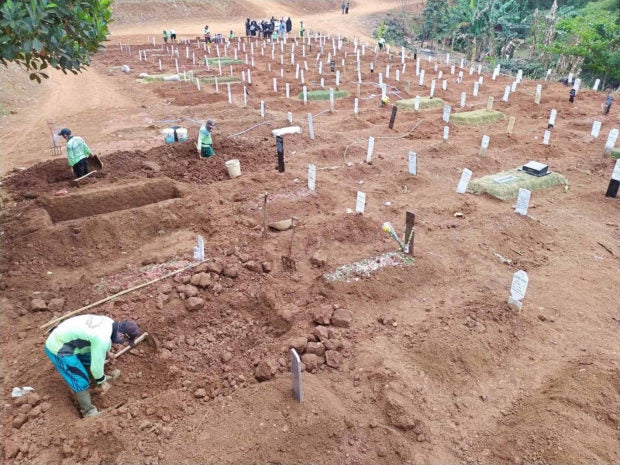 Gravediggers at Pondok Ranggon Cemetery in East Jakarta dig graves for COVID-19 victims on Wednesday. The rate of COVID-19 funerals in Pondok Ranggon is high with 700 to 720 funerals per month. The Jakarta Post/Asia News Network/P.J. Leo

JAKARTA — With friendly embraces, handshakes and face-to-face conversations carrying risks these days, the pandemic has completely changed interactions – including how we say goodbye.

An Indonesian national who has been residing in the United States over the last 20 years, Aryo Warsadjaja has attended three virtual funerals over the course of the pandemic.

The first one was for his best friend, who died of COVID-19 in July, followed shortly after by funerals for his wife’s uncle and, very recently, his aunt, both of whom died of other illnesses.

Attending funerals through Zoom meetings and WhatsApp video calls had never occurred as a possibility to Aryo before, but now, holding virtual processions is the only safe option given the pandemic.

“It was painful, but at least I got to participate in the funerals. With close ones and families, it’s normal to need closure, mentally and emotionally,” Aryo said.

Aryo said he had planned to go home in July this year for his father and his late aunt’s birthday, but the pandemic prevented him from meeting his aunt for what would have been the final time.

Traveling during a pandemic was risky, and 14 days of self-quarantine upon arrival meant he would have to take more time off from work, he said.

“If not for the pandemic, I would want to be there to recite prayers along with my family […] to hug them; my cousins and my mother, who is now only one of nine siblings still alive. This experience cannot be replaced [by virtual funerals],” he said.

The pandemic has also made bidding adieu to friends and colleagues more difficult.

COVID-19 has battered the country’s economy, forcing businesses to shut down and pushing millions out of the workforce. As a result, some have had to move town on short notice, leaving them without time to say a proper goodbye.

In March, when President Joko “Jokowi” Widodo for the first time urged employees to work from home as the country began to see more confirmed COVID-19 cases, 24-year-old Nourma Vidya Primantika was on leave from her work in a Jakarta-based company to visit her hometown in Malang, East Java.

Little did she know that what was supposed to be only a three-day leave turned out to be months of working remotely – until her company announced in late July that it would have to liquidate after months of standing on shaky grounds. This meant automatically laying off all its workers, including Nourma.

The online town hall meeting that brought the sudden announcement also brought with it many questions about her future, as well as the realization that it was time to say farewell via the web.

“The announcement was so sudden and we lost our job within a day. During the farewells, we were so confused; we talked about severance pay and many other things that we had to take care of within a short time,” she said.

“So it didn’t really feel like farewell. There was no sweet and touching [words exchanged].”

Nourma has landed a new job in Yogyakarta, but she never got the opportunity to say a proper goodbye to her former colleagues. All her belongings were left behind at her brother’s house in Jakarta.

When Shelia Regita Pasaribu, 23, found out in June that she would be laid off along with several others, one of the questions she asked her managers was whether she could bid a proper goodbye to her colleagues.

“I wanted to part ways on good terms, and I missed them too. And I didn’t want to suddenly vanish just like that,” Shelia said.

Her department promised that there would be a farewell party and eventually held a Zoom farewell meeting, attended by some 50 of her colleagues, she said.

Weeks later, her much smaller team invited her to a surprise virtual farewell, in which they had set up her photo as their Zoom backgrounds. They also made a touching video of her along with messages wishing her luck on her future endeavors, Shelia recalled.

As much as she wanted to meet them directly, Shelia said the risks were not worth taking, even when restrictions had been lifted.

“It’s not wise to meet people when COVID-19 is still around,” she said.