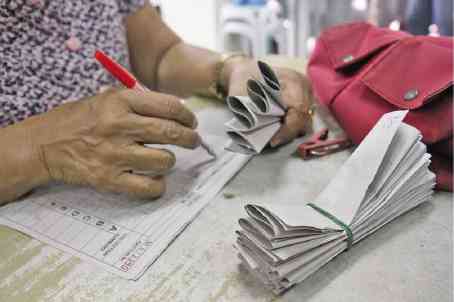 LUCENA CITY – Police arrested 14 illegal bet collectors or “bookies” for Small Town Lottery (STL) in various parts of Quezon province after a week-long intensified campaign against saboteurs of the government-sanctioned lottery.
Colonel Audie Madrideo, Quezon provincial police chief, reported that anti-illegal gambling agents in operations conducted from October 11 to 17, nabbed the suspects while collecting  bets in the mujicipalities of Mulanay, Sariaya, Tiaong, Calauag, Catanauan, Dolores, Tayabas City and Lucena City.
The arrested suspects failed to produce legitimate identification cards issued by Pirouette Gaming Corp., the licensed STL operator in the province.
The suspects will be charged with violation of the amended law against illegal gambling.
Last October 1, 2020, the Philippine Charity Sweepstake Office (PCSO) allowed the resumption of STL operations in 59 provinces.
“The STL operations shall be automatically suspended if the areas are placed in enhance community quarantine or modified enhance community quarantine,” the PCSO warned on its Facebook page.