Thousands of protesters return to streets after police clashes 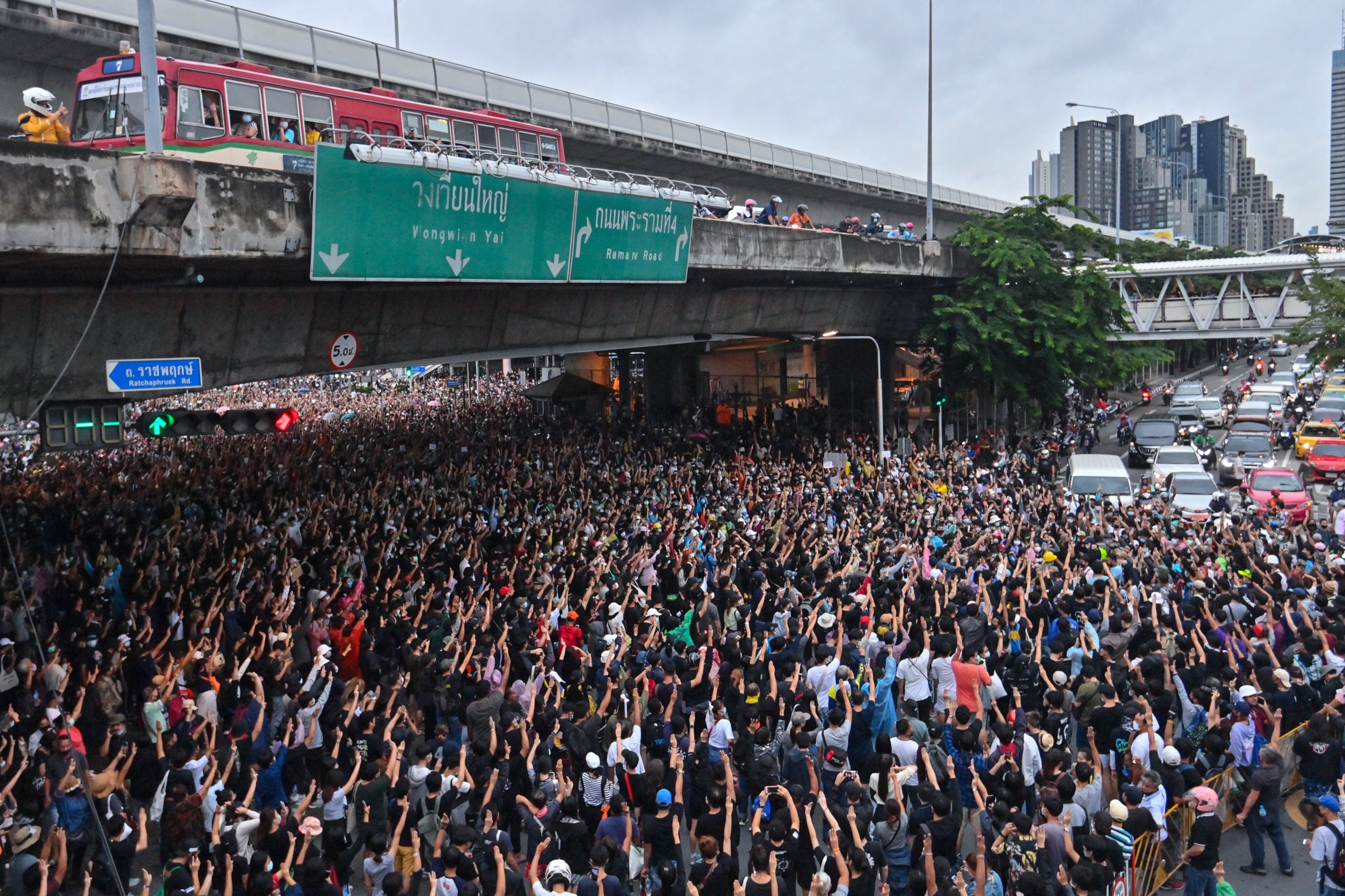 Pro-democracy protesters give the three-finger salute during an anti-government rally at Wongwian Yai in Bangkok on October 17, 2020, as they continue to defy an emergency decree banning gatherings. (Photo by Mladen ANTONOV / AFP)

Officers dispersed thousands of protestors on Friday night by spraying water laced with blue dye and a chemical agent to mark participants for future legal action.

But the escalation in police tactics has not cowed the burgeoning youth-led protest movement, which is demanding the resignation of a premier first brought to power in a military coup and reform of the kingdom’s powerful monarchy.

One of the pro-democracy movement’s main organizing groups called on its supporters to return to the streets on Saturday afternoon.

“Be prepared both physically and mentally for the demonstration and to cope with a crackdown if it happens,” the online post from Free Youth said.

An hour before the scheduled 4:00 pm (0900 GMT) protest start, the group announced three different locations for rallies — outsmarting authorities that had closed roads to two suspected venues that ended up not being the meeting points.

In the city’s northern Lat Phrao district, hundreds gathered in the middle of a street with helmets and gas masks ready, raising a three-finger salute adopted from the “Hunger Games” films as a symbol by the pro-democracy movement.

Across the Chao Phraya river, nearly a thousand rallied in the western Wongwian Yai district chanting “Long live the people, down with dictatorship!”, while in southeastern Udomsuk a similar show of force brought busy traffic to a standstill.

Operators of both the Skytrain and underground rail networks had shut down services city-wide to prevent protesters from joining.

Prime Minister Prayut Chan-O-Cha extended an emergency decree banning gatherings of more than four people by another month on Friday.

The former army chief, who masterminded a coup in 2014 before being voted into power last year in election protesters say was rigged in his favor, also rebuffed calls for his resignation.

At least 65 prominent protesters have been arrested since Tuesday, Thai Lawyers for Human Rights told AFP on Saturday, as authorities escalated a crackdown on months of slowly building unrest.

Eight have since been released, including activist Tattep “Ford” Ruangprapaikitseree, who was bailed on Saturday after his detention the previous night.

He was quick to go live on Facebook to denounce the use of violence against unarmed protesters.

“The government is no longer legitimate. Prayut Chan-O-Cha, you’re a tyrant,” he said.

Two other activists were arrested on Friday under a rarely used law banning “violence against the queen” after they joined a group Wednesday that surrounded a royal motorcade carrying Queen Suthida, flashing a pro-democracy salute as the car drove by.

Both men could face life in prison if convicted.

The government insisted the use of force had been lawful to stop those trying to “create divisions” in the country.

“There was no victory or defeat for either side. It’s a defeat for all Thais,” government spokesman Anucha Burapanchaisri said in a statement.

The pro-democracy movement is making an unprecedented challenge to the kingdom’s powerful monarchy.

Protesters are demanding the abolition of a strict royal defamation law, which carries jail sentences of up to 15 years per charge, and for the monarchy to stay out of politics.

The institution currently wields enormous influence and is flanked by an arch-royalist military and billionaire clans.

King Maha Vajiralongkorn sits at the apex of power.

Since ascending the throne in 2016, he has taken personal control of the palace’s vast fortune — worth an estimated $60 billion — and moved two army units under his direct command.

The government insists the reforms to the royal family are off-limits, but this position was becoming untenable, said International Crisis Group analyst Matthew Wheeler.

“The degree of repression necessary to effectively reinstate the prohibition, including online, would tarnish both the government and the monarchy.”