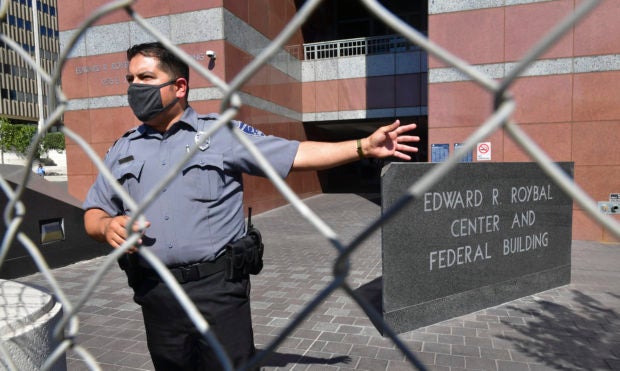 A security guard gestures while speaking with journalists outside the Edward R. Roybal Federal Building in Los Angeles, California on October 16, 2020, where former Mexican defense minister Salvador Cienfuegos is scheduled to make an initial court appearance via video call. – Former Mexican defense minister Salvador Cienfuegos has been charged with drug trafficking and laundering money while he was in the government, documents released by federal prosecutors in New York on October 16, 2020 said. (Photo by Frederic J. BROWN / AFP)

NEW YORK, United States –   A former Mexican defense minister has been detained in the United States and charged with drug trafficking and money laundering in the latest high-profile arrest linked to the country’s powerful cartels.

Salvador Cienfuegos, a key figure in ex-president Enrique Pena Nieto’s 2012-2018 government, was detained at Los Angeles airport on Thursday while on a trip with his family.

He is accused of conspiring to produce and distribute “thousands of kilograms” of cocaine, heroin, methamphetamine and marijuana in the US between December 2015 and February 2017, documents released by federal prosecutors in New York said.

The 72-year-old retired general nicknamed “The Godfather” allegedly abused his position “to help the H-2 Cartel, an extremely violent Mexican drug trafficking organization,” according to the documents.

“In exchange for bribe payments, he permitted the H-2 Cartel — a cartel that routinely engaged in wholesale violence, including torture and murder — to operate with impunity in Mexico,” the indictment said.

The prosecution said the evidence included thousands of Blackberry messages between Cienfuegos and cartel members intercepted by the authorities.

The charges are punishable in the United States with a minimum of 10 years in prison and a maximum of life imprisonment.

The indictment was filed by the New York City District Attorney’s Office in August 2019, but was only released Friday.

Cienfuegos made a brief appearance before a Los Angeles judge by teleconference to acknowledge the three counts of drug trafficking and one of money laundering.

US authorities are seeking a permanent order of detention, saying Cienfuegos poses a “significant risk of flight.”

He is expected to be transferred to New York in the coming weeks, prosecutors said.

“Of course, all this must be proven,” he said.

But the arrests were a clear sign that Mexico was previously run by “a narco-government and without doubt a mafia government,” added the leftist leader, who came to power in 2018 vowing to crack down on corruption.

Ex-public security minister Genaro Garcia Luna was detained in Texas in December 2019 on charges of taking huge bribes to allow the notorious Sinaloa cartel to ship drugs into the US, which he denies.

The arrest could lead to US authorities pursuing even bigger targets, said Mike Vigil, former head of international operations for the US Drug Enforcement Agency (DEA).

“Cienfuegos has enough information,” he told AFP when asked if the investigation could even result in charges against former president Enrique Pena Nieto, who also faces corruption allegations at home.

“Prosecutors and federal agencies (in the US) always look for information from detainees like Cienfuegos that leads them to people at the same level or above.”

Vigil said the allegations against Cienfuegos appeared to have come from witnesses in the US trial of drug lord Joaquin “El Chapo” Guzman who was sentenced to life in prison in July 2019.

Following the detention of the two ex-ministers, “many members of the Mexican security forces won’t want to collaborate with US agencies because there will be resentment and distrust,” he added.

Cienfuegos’s arrest comes ahead of the November 3 presidential election in the United States, where both sides are wooing Hispanic voters in a country home to around 36 million Mexicans or descendants of Mexicans.

Before coming to power Lopez Obrador vowed to send the military back to the barracks, but it has kept its role tackling cartel-related violence and even gained more responsibility including control of the ports and customs.

Lopez Obrador reiterated his backing for the armed forces as “pillars of the Mexican state” but said any members of the military found to have colluded with Cienfuegos would be dealt with appropriately.

While defense minister, Cienfuegos complained about his troops having to take part in the country’s war on drug trafficking, saying the military was not suited for the job.

“We didn’t ask to be here. We don’t like it. We didn’t study how to chase criminals,” he said.