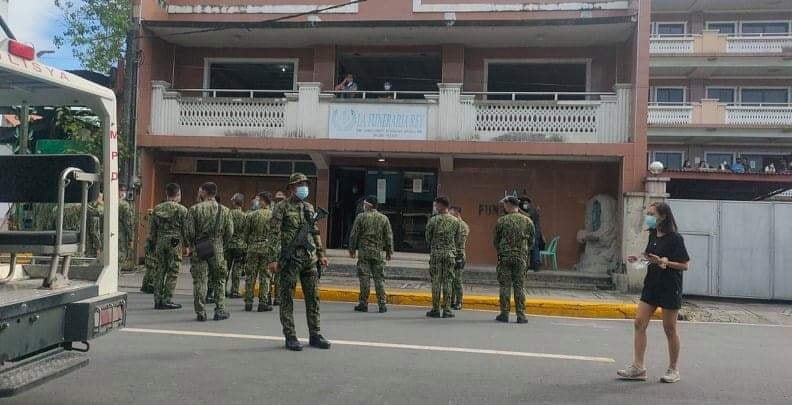 Some 20 uniformed policemen are seen in front of La Funeraria Rey in Pandacan, Manila where Baby River’s wake is located. /Photo from Kapatid

MANILA, Philippines — Human rights group Kapatid on Friday raised concern over the presence of 20 police officers who are allegedly blocking visitors to the wake of Baby River, the child of detained activist Reina Mae Nasino.

“ALERT: Around 20 policemen from Station 10 are deployed at the La Funeraria Rey in Pandacan, Manila. They are barring people from entering and they are depriving people from seeing Baby River one last time,” read the statement from Karapatan.

In a separate statement, Karapatan spokesperson Fides Lim appealed to the police to allow Nasino to grieve for her child without police interference.

“We hope that what transpired last Wednesday will not happen today. You only bury your dead once. If Reina Mae wants to tightly embrace her child’s casket, let her do so. If she wants to hug her family to seek comfort, let her do so. These are little things compared to what this government did to her,” Lim said.

Previously, the National Union of People’s Lawyers (NUPL) said they will sue personnel of the Bureau of Jail Management and Penology (BJMP) for creating tension when Nasino appeard at the wake.

An altercation happened after Nasino’s police escorts reportedly prevented her from being interviewed by journalists.

The Manila Regional Trial Court shortened Nasino’s visit to her child’s wake from three days to only three hours for two days from 1 p.m. to 4 p.m. on October 14 and 16.

The court amended its order after the Manila City Jail informed it that it only has limited personnel to escort Nasino during her furlough.

Baby River will be laid to rest this Friday afternoon at the Manila North Cemetery, Karapatan said.