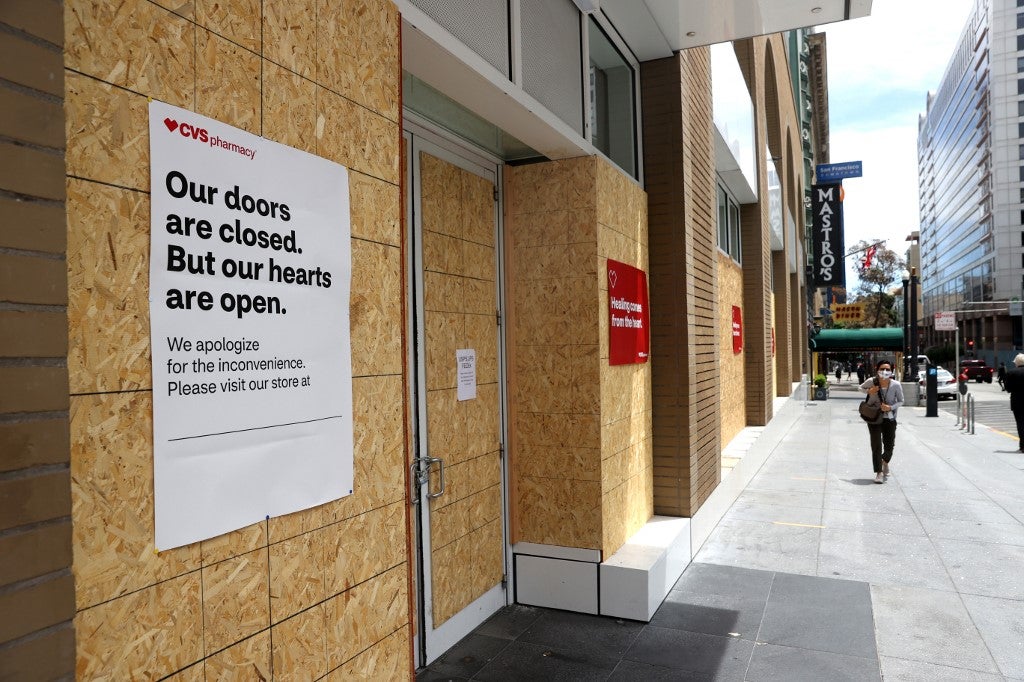 A person walks by a closed CVS store on June 11, 2020 in San Francisco, California. Economic worries due to the coronavirus COVID-19 pandemic continue. Justin Sullivan/Getty Images/AFP

The 53,000 increase from the prior week was the sharpest rise in seasonally adjusted initial claims since the week of August 15, as the United States attempts to recover from mass layoffs caused by business shutdowns earlier this year to stop Covid-19.

The jump brought the levels of initial claims back to where they were in late August, and remained above the single worst week of the 2008-2010 global financial crisis, the last economic downturn.

Another 372,891 people also filed claims for benefits under a special program to help workers not normally eligible for benefits and who lost their jobs due to the pandemic, about 91,000 less than the week prior, according to the unadjusted figures.

The report comes amid an ongoing impasse in Washington over passing more aid to the beleaguered US economy, with Democrats and Republicans still unable to agree on a new stimulus package after the expiration of key measures of the $2.2 trillion CARES Act passed in March.

“Based on today’s jobless claims data, the employment situation is fading faster than expected, likely weighed down by tens of thousands of layoffs by major employers such as airlines and Disney,” said Robert Frick of Navy Federal Credit Union.

And the data was complicated by California reporting an outdated total after it paused processing applications to address a backlog and root out fraud.

The insured unemployment rate in the week ending October 3, the latest for which data was available, ticked down about a percentage point to 6.8 percent.

Rubeela Farooqi of High Frequency Economics said that improvement reflects “people being hired but also individuals exhausting their benefits. Overall, the signal from the claims data is still one of extremely weak conditions in the labor market.”

The New York Federal Reserve Bank’s Empire survey was at 10.5 percent in October, a drop of about seven points from September but indicating manufacturing in New York state and parts of New Jersey and Connecticut was expanding for the fourth consecutive month.

Manufacturing activity increased at a faster pace in the area covered by the Philadelphia Federal Reserve Bank, with its industry survey climbing 17 points to 32.3 percent in this month, as a majority of firms reported an increase in new orders.

However, Oren Klachkin of Oxford Economics warned that with Covid-19 still rife in the US, “Weak demand, supply chain disruptions and virus uncertainty will constrain manufacturing’s recovery until a health solution is broadly implemented.”

Read Next
Velasco promises ‘best effort’ to transmit House-approved budget to Senate by end of October
EDITORS' PICK
Nestlé Philippines’ ‘NESCAFÉ Plan’ bags Grand Anvil at PRSP 56th Anvil Awards
822 NPA-free barangays set to get P20-M gov’t aid — Esperon
Pope Francis to meet top cleric Sistani on second day in Iraq
Don’t waste the hope of vaccines, warns WHO
Every Filipino home can now be a smart home with realme TechLife
Smart reinforces superiority with best speed and mobile video experience in PH
MOST READ
Robredo on Sara Duterte leading poll surveys: Why are Filipinos drawn to leadership of this kind?
So: I lacked connections to succeed in PH ‘culture’
US weapons, hardware in exchange for VFA
3,439 new COVID-19 cases push PH’s total to 591,138
Don't miss out on the latest news and information.