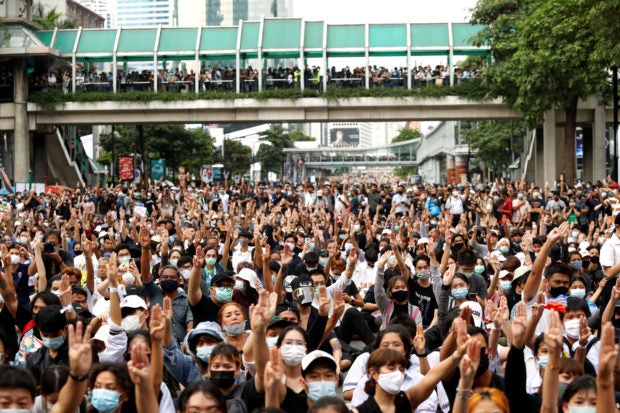 Pro-democracy protesters show the three-finger salute as they gather demanding the government to resign and to release detained leaders in Bangkok, Thailand October 15, 2020. REUTERS/Jorge Silva

BANGKOK — Hundreds of Thai protesters demonstrated in Bangkok on Thursday in defiance of a ban imposed to end three months of anti-government action that has targeted King Maha Vajiralongkorn as well as Prime Minister Prayuth Chan-ocha, a former junta leader.

“Release our friends,” protesters chanted at police, referring to the arrest of some 40 protesters this week. They held up the three-finger salute adopted as a symbol of opposition after Prayuth’s 2014 coup.

Despite police appeals over a loudspeaker to disperse, the group spilled across the Ratchaprasong Intersection in one of Bangkok’s busiest commercial districts.

A protester tied a white bow to the wrist of one policemen, saying “One day we will stand side by side when Thailand is better.”

Three months of protests in the country of 70 million have been largely peaceful, as was a march by tens of thousands of people on Wednesday. But in one incident, police pushed jeering protesters away from a motorcade carrying Queen Suthida.

Overnight the government banned political gatherings of five or more people and the publication of news and online information that could threaten national security.

“The measures were necessary to ensure peace and order and to prevent further incidents after protesters affected the royal motorcade and violated the monarchy with provocative language,” government spokesman Anucha Burapachaisri said in a statement.

Other reasons given for the emergency measures were damage to the economy from protests and the risk of spreading the coronavirus, of which only one locally transmitted case has been reported in more than four months.

“The situation right now is tantamount to a coup,” said Tattep Ruangprapaikitseree, one of the few protest leaders still free.

Campaign group Amnesty International said the measures were unjustified and would sow fear.

Police said they had arrested protest leaders Parit “Penguin” Chiwarak and rights lawyer Arnon Nampa. Arnon said on Facebook he was being forced to board a helicopter to the northern city of Chiang Mai, where he faces sedition charges over a speech in August.

Pictures on social media later showed student leader Panusaya “Rung” Sithijirawattanakul being taken away in a wheelchair as she gave the three-finger salute.

“We haven’t been able to restore a true democracy yet,” said 54-year-old Sun Pathong, a veteran of a decade of anti-establishment protests and counter-protests before the 2014 coup.

“I’ll be back. We have to continue the fight even if we risk our lives.”

The protest movement aims to remove Prayuth, saying he manipulated an election last year to keep hold of power. He says the election was fair.

Those marching on the streets also want a new constitution and have called for a reduction in the powers of the king. They want his role to be clearly subject to the constitution and seek the reversal of orders that gave him control of the palace fortune and some army units.

Criticism of the monarchy is punishable by up to 15 years in prison under lese majeste laws, though Prayuth said earlier this year the king had asked that they not be enforced for now.

“The clearance of the assembly (of protesters) was very reasonable because the protesters apparently harassed the queen,” royalist politician Warong Dechgitvigrom commented on Facebook.

Thailand’s benchmark stock index was down 1.8% at 0849 GMT. The baht weakened slightly against the dollar.