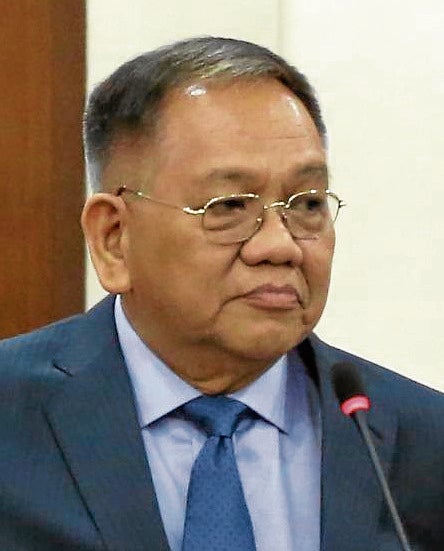 MANILA, Philippines — Chief Justice Diosdado Peralta on Wednesday said he was satisfied with the efforts of the Department of Environment and Natural Resources (DENR) to comply with a 2008 Supreme Court order to clean the polluted waters of Manila Bay.

He took note of the water improvements made by the DENR’s wastewater treatment plant, which processes filthy water from “esteros” before it is dumped into the bay.

“The purpose of the continuing mandamus is to clean the water. If you ask me if I am satisfied, I am satisfied because the water is clean,” Peralta told reporters after touring the artificial white sand beach on a stretch of the Manila Bay shore with Environment Secretary Roy Cimatu.

He said he based his statement on the water quality report.

“I saw the wastewater treatment. The water coming out of it was clean,” he said, citing the water treatment plant engineer’s report that fecal coliform level was now 49 most probable number (MPN) per 100 milliliters, which is below the required minimum level of 200 MPN/100 ml.

“That means the water dumped to the bay from the esteros is already clean,” Peralta added.

On Dec. 18, 2008, the Supreme Court granted a petition by a group of residents concerned about the polluted bay and issued a standing order directing government agencies led by the DENR to rehabilitate Manila Bay and restore its waters to levels fit for swimming, skin-diving and other forms of “contact recreation.”

The chief magistrate declined to comment on the artificial beach created by the DENR using pulverized dolomite, due to a pending case before the Supreme Court.

He was referring to a petition filed by the party list group Akbayan on Sept. 24 asking the court to cite the DENR for contempt for violating its 2008 order to rehabilitate Manila Bay when it dumped pulverized dolomite along a short stretch of the shore near the US Embassy.

Akbayan said the artificial beach was a “window-dressing project” that would harm the environment and the people who will be exposed to particles of dolomite, which is normally used as construction material.

Peralta visited the beach after asking for a DENR briefing on the status of the Manila Bay cleanup. He was joined by Associate Justices Rodil Zalameda, Mario Lopez, Edgardo delos Santos and Ricardo Rosario.

Speaking about the Manila Bay rehabilitation efforts during a news briefing on Wednesday, Environment Undersecretary Benny Antiporda noted that the edges of the artificial beach looked darker these days, but it did not mean that the dolomite was being washed away.

“What happened is a wash in. The dark sand came in and lay on top of the white dolomite,” he said.

“In other words, nothing was washed out. The white dolomite was not depleted, we just had more black sand from under the sea,” he added.

He was reacting to criticisms that the beautification project was a waste of money as storms would just wash away the dolomite.

That is why the beach is supposed to be cleaned and maintained, as is done in other parts of the world, Antiporda said.

“We’re not maintaining it now because this is still under the jurisdiction of the contractor,” he said.

Antiporda also lashed out at marine scientists and biologists from the University of the Philippines (UP) who had criticized the project.

In separate statements, the UP Marine Science Institute (MSI) and the UP Diliman’s Institute of Biology said the P389-million beautification effort would not solve the root of environmental problems in Manila Bay and may even adversely impact the ecosystems thriving in it.

Antiporda said the UP experts had no right to criticize the dolomite beach project “because you had been paid.”

He castigated them for supposedly accepting payment for their consultation services when they had already been paid as “scholars of the people.”

He said the DENR had paid “half a billion” since 2016 to consult with UP experts, and the amount did not include infrastructure projects. He also called for an audit of the funds given to UP.

“As far as I know, UP is supposed to be free. Why are you charging the government after the people funded your education?” Antiporda said.

“And now that we’re doing something good, we have to pay you?” he added.

He dismissed their proposal to plant mangroves because that “will destroy the landscape.”

“That won’t look good. At the same time, mangroves would not grow well in the area,” Antiporda said.

In an email interview, UP MSI director Laura David welcomed any audit.

She said the “correct amount” they received was P364,073,909.40 over the last decade for 10 projects “in collaboration with DENR and cosponsorship support for a symposium.”

David said the money funded scientific research and investigation, including the use of laboratories and research equipment and the support for research assistants.

It also supported the training of personnel from national government agencies and higher educational institutions.

She said it was inaccurate to say that the amount paid was only for consultations, and that no “infrastructure” was created since 2016.

“Maybe Sir Antiporda is not familiar with the contract service of DENR with UP, that none of it is consultancy,” she told the Inquirer. “All of those are for research and capacity building.”

In a statement on Tuesday, the UP MSI reaffirmed its commitment to a partnership with the DENR, but stressed that while consultations may be provided without charge, scientific research was not for free.

“These are the typical costs typically shouldered by clients, because UP MSI is not a line agency in the government’s executive branch,” David said. “We do not have access to funds that would respond to questions that need more research.”

She stressed that all of the institute’s research and development activities were project-based, with very specific fund disbursement guidelines and limitations.

The institute’s funds for its internal maintenance and other operating expenses are limited to maintaining the laboratory facilities and field equipment in their institute in Diliman, and in the Bolinao Marine Laboratory, which spearheads the study of giant clams in Pangasinan province.