Chinese nearly half of workforce in China-funded bridge project — DPWH 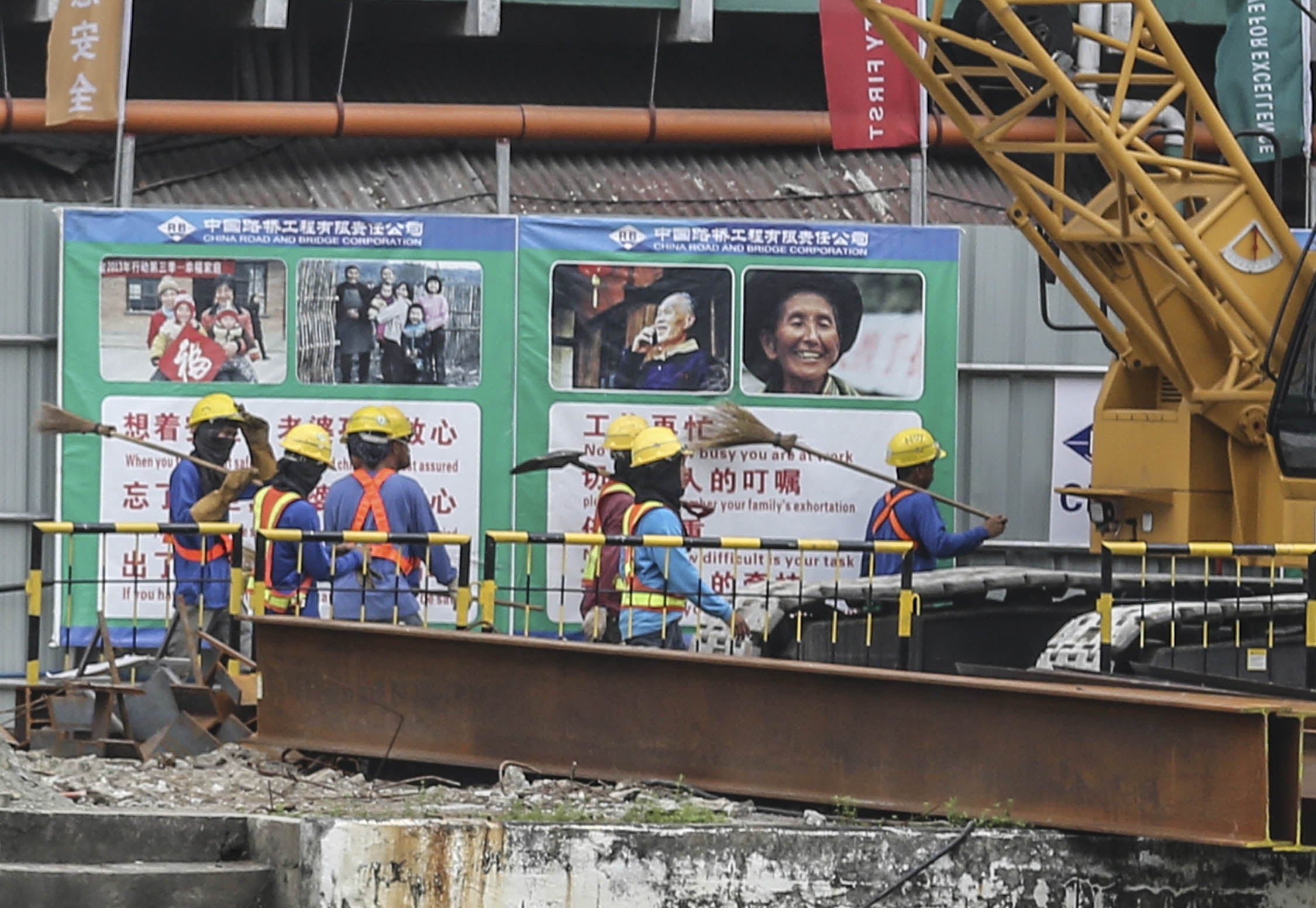 AT HOME IN MANILA Chinese workers walk past posters showing images of home as they begin the day’s work on the China-funded Binondo-Intramuros Bridge in Manila. INQUIRER file photo / JOAN BONDOC

MANILA, Philippines — Nearly half of the workforce in one of the two bridge projects funded by China in the country is made up of Chinese workers, the Department of Public Works and Highways (DPWH)  told senators on Wednesday.

During the Senate budget hearing for the DPWH, Undersecretary Emil Sadain said that the country has two existing grant packages: the Estrella-Pantaleon bridge and the Binondo-Intramuros bridge.

Sadain said that in the Binondo-Intramuros Bridge project, Filipino workers compose 55 percent of the workforce while 45 percent is composed of Chinese workers.

“The Binondo-Intramuros..there are 55 percent Filipino and 45 percent Chinese,” he added.

Sadain explained that these Chinese workers are limited to the installation of supplied materials from China.

“They will be just here for the installation but on the succeeding constructions of the down-ramp, up-ramp, this will be largely Filipino that will be engaged,” he said.

Meanwhile, the workforce for the Estrella-Pantaleon Bridge is composed of 69 percent Filipino workers and 31 percent Chinese workers, Sadain said.

“The engagement here is actually down to the technicalities and the specifications of the materials that will be used for…the construction,” the DPWH official added.

“Nevetheless, for future ODA (Official Development Assistance) projects, we’ll put some consideration to give more high emphasis on the engagement of Filipino workers over the Chinese workers,” he further said.

Before this, Senator Francis Pangilinan asked DPWH officials for assurance that it would prioritize the employment of Filipino workers for infrastructure projects.

“The construction industry has registered the largest drop in unemployment in the second quarter of this year, that’s almost 30 percent drop in employment,” he said.

“So, it is really imperative for the government to be able to create jobs and also protect existing jobs,” the senator added.

Pangilinan pointed out that the percentage of Chinese workers in the two bridge projects is “high.”

“We have many ways of being able to push for local employment over foreign employment. Mataas yung 45 percent, mataas yung 31 percent, no matter how you look at it…halos kalahati pala yung isa, 45 percent foreign workers,” he said.

“COVID-19 is the game changer, and we also have to change our way of dealing with these ODA contracts and pushing for and fighting for Filipino employment, unahin natin yung ating mga kabaayan,” he added.

“We will always be one in this desire to increase job creation in our country and we will only allow foreign if it’s absolutely necessary for certain technical skills,” Villar said.

Who ‘benefitted’ from drug war deaths? ‘Filipinos, not me,’ says Duterte