‘What happened?’ Lacson on DPWH increased funding for local projects 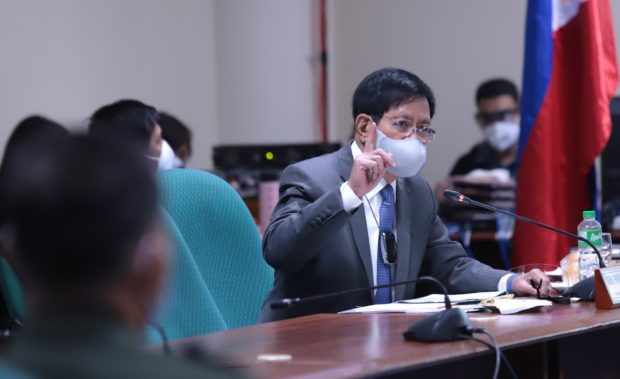 MANILA, Philippines — Senator Panfilo Lacson on Wednesday quizzed the Department of Public Works and Highways (DPWH) over the high allocation for local projects, such as the nearly P70-billion funding for multi-purpose buildings and facilities.

(…that is why I am asking if there was intervention from some legislators–in general, what we have seen is that local projects ballooned. What was significantly reduced is the number of national projects.)

“I want a forthright answer. Did [your] late submission involved intervention from some legislators? Or was it entirely [your] own doing?” he added.

For Lacson, the proposed spending of the DPWH did not reflect the theme of the national budget for 2021, which is “Reset, Rebound and Recover.”

The DPWH had to submit details for projects under the proposed national budget for 2021 to the Department of Budget and Management (DBM) after the National Expenditure Program (NEP) had already been printed.

Villar said the delayed submission of the project details was because the DBM only gave them their ceiling budget on July 16 and a deadline of July 17 to submit their budget based on this ceiling.

“The ceiling was given at a date very close to the printing which rendered us unable to give the details in such a short period of time. So with coordination with the DBM, they allowed us to submit the details of our NEP in an annex that followed shortly thereafter,” the DPWH secretary said.

But Lacson pointed out that what the DPWH belatedly submitted seemed to have “mangled” the agency’s entire appropriations.

“Beyond recognition, ‘di na natin makilala [we can no longer distinguish],” he said.

Lacson said that compared to the NEP originally submitted by the DBM, funding for national roads and bridges was cut by millions under the submission from the DPWH while the budget earmarked for local roads and projects was increased.

As an example, the senator said funding for the road network development was decreased by P21.4 billion from the NEP compared to the submission of the DPWH.

(Why is the big difference? The variance of P21.456 billion is no longer in the road network development, this has big effect in the national development, which I believe should be the focus of “Reset, Rebound and Recover.”)

(We have noticed there is for multi-purpose building, that has a big amount, about P67 billion.)

In response, Villar said what the DBM originally submitted under the NEP “was just their suggestive indicative ceilings.”

“The one that we submitted was adjusted based on our priority programs. So that’s the reason for the adjustment…Seeing as how the ceiling [budget] was given to us at a date that made it difficult for us to identify individually all the projects,” he said.

Further, Villar underscored the need to also provide funding for local projects to address the needs of communities there.

“With regards to your question regarding the multi-purpose facilities, of course, we also receive many requests from various sectors for these buildings. If you look at local communities, there is a need to service them somehow,” he said.

“Of course, national is still the priority.  Nevertheless, we also want to do pump-priming in the countryside and in communities that are hard to reach. These other local projects, we feel, are important in stimulating the economy in those areas,” he added.