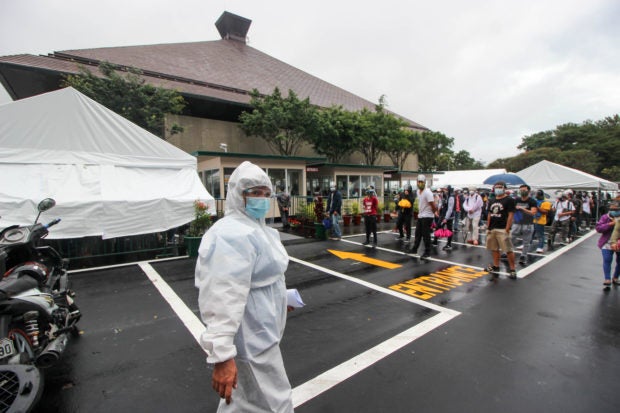 MANILA, Philippines — The government is looking for other COVID-19 tests to screen tourists after the pilot study of the antigen testing in Baguio City failed, according to the spokesman of the National Task Force (NTF) Against COVID-19 on Wednesday.

(Unfortunately, it did not pass. So we are looking for another testing protocol.)

The antigen test is said to detect coronavirus molecules that trigger immune responses within 15 minutes. However, the World Health Organization (WHO) advised against using antigen tests for screening travelers.

Baguio City was chosen as the pilot city for the antigen test, where travellers are subjected to undergo both RT-PCR tests as well as an antigen tests to determine if laboratory results match.

As Padilla said that the pilot study in Baguio City failed, the government is now looking for other testing protocols.

(So we are looking for other testing protocols that give fast results, such as saliva test or breath test that may will give fast results to passengers of the airline industry, as well as public transportation especially those in boats.)

INQUIRER.net has reached out to Baguio City Mayor Benjamin Magalong and DOH spokeswoman USec. Maria Rosario Vergeire to confirm Padilla’s statement, but has yet to get a response as of this writing.

Read Next
Governments use pandemic to crack down on online dissent — watchdog
EDITORS' PICK
Essential workers: The many faces of pandemic heroism
Through the lens of BJ Pascual: From famed celebrities to young business magnates
Experience clearer calls nationwide with Smart VoLTE
Fairways & Bluewater Resort Boracay shines in the International Arena
Finding ‘3rd generation’ crucial in contact tracing, says Magalong
2020 Filipinos of the Year: Health-care front-liners
MOST READ
US capitals on edge for armed protests as Trump presidency nears end
Lacson twits Garbin ‍on Cha-cha claims
COVID-19 vaccine from China’s Sinovac only costs around P650 per dose, says Roque
For P500, you can book this QC garden for private dining
Don't miss out on the latest news and information.