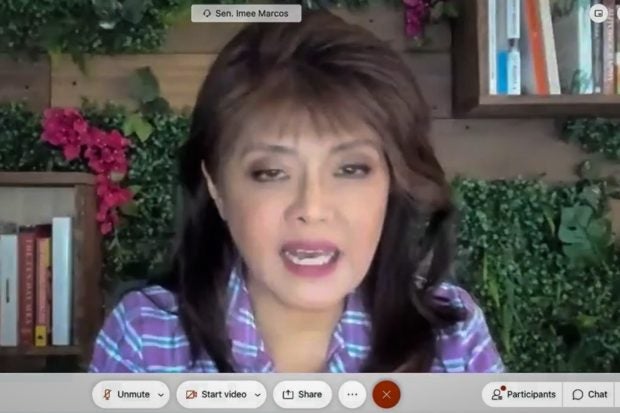 MANILA, Philippines — Senator Imee Marcos has appealed to the Department of Agriculture (DA) to provide more drying machines, as well as set up storage facilities that will prevent wet-season harvests from going to waste.

In a statement on Monday, Marcos, who chairs the Senate committee on economic affairs, said that this will also allow rice farmers to sell their dry palay for better prices.

According to the senator, the lack of drying machines and storage facilities are the reasons why rice farmers are suffering losses amid October’s wet-season harvest.

Marcos added that rice farmers are now selling their wet palay at P12 per kilo, compared to P15 per kilo weeks earlier.

“Local rice farmers are no longer thinking of profit, just cutting their losses and paying back their debts. They’ve been left high and dry amid the wet-season harvest,” the senator said.

“Production cost also goes up by one to two pesos per kilo if a farmer avails of a drying machine at the nearest coop, apart from having to line up with so many others,” she added.

Marcos added that in Nueva Ecija, the cost of hired labor also increased in the middle of the wet season,  from 10 cavans to 15 cavans for every 100 cavans harvested.

Citing complaints of farmers that reached her office, the senator said: “Some rice farmers are opting to put off harvesting amid the rains, rather than pay more for labor and sell at a loss to rice traders.”

“They’re now drying what palay they could fit into their own homes. What becomes discolored from moisture is later sold cheaply as broken rice or duck feed,” she added.

Aside from this, Marcos is also pushing to schedule rice imports outside of the Philippines’ harvest seasons in March to April and September to October.

This way, Marcos added, farmers do not have to compete with unrestricted importation under the Rice Tariffication Law.