newsinfo / Nation
Nation
'Too many usecs and asecs'

Senators criticize PCOO for allocating bulk of budget on salaries, not equipment 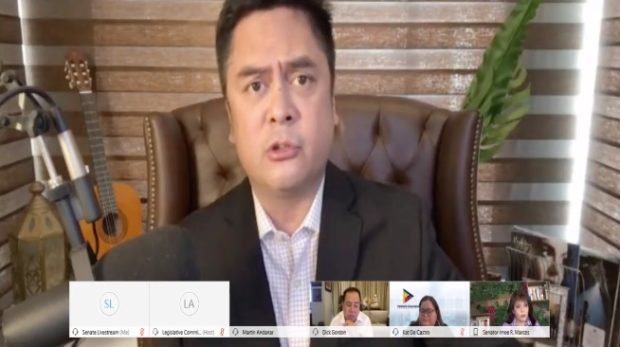 MANILA, Philippines — Senators on Tuesday called out the Presidential Communications Operations Office (PCOO) for allocating a bulk of its budget for the salaries of its officials and personnel but not enough for the procurement of equipment.

During the Senate deliberations on the proposed P1.59-billion budget of the PCOO, Senator Richard Gordon pointed out that the agency has “a lot” of undersecretaries, assistant secretaries and general managers.

(You have a lot of undersecretaries, assistant secretaries, and general managers. In my case, I minimize expenses in the Philippine Red Cross, I get the people that I really need. In fact, at the Red Cross, I think there’s only four to five people who are really running it.)

“You really have to choose where you want to fight, you cannot spread all your money in so many things,” he added.

Senator Imee Marcos also noted that of the P1.59-billion proposed budget of the PCOO for 2021, some P1.4 billion is allocated for personal services and the Maintenance and Other Operating Expenses (MOOE).

(Your budget is only P1.59 billion, so only about P100 million is left for equipment…That’s why I’m wondering, we are prioritizing salaries and the MOOE. We are asking you to focus on engineering. I wish we are more focused on the engineering aspect.)

Under the proposed PCOO budget for 2021, P79.23 million was approved by the Department of Budget and Management (DBM) for the agency’s capital outlay.

The highest allocation under the capital outlay goes to the allocated for the “Government Communications Academy” and the purchase of its ICT equipment and software which amounts to P52.35 million.

Over P13 million is earmarked for the procurement of ICT equipment for the Radio-Television Malacañang (RTVM); P5.24 million for the Philippine Broadcasting Service (PBS); and P1.77 million for the News and Information Bureau.

The PCOO also allocated P4.17 million for the purchase of ICT and printing equipment as well as software for the Bureau of Communication Services; and P2.55 million for parking area improvement and perimeter fencing for the building of the Philippine Information Agency.

PCOO Secretary Martin Andanar said the agency has requested funding from the DBM to upgrade the equipment of the People’s Television Network (PTV), the Intercontinental Broadcasting Corporation (IBC), and the PBS.

(I was just in Region 10 and I was able to talk to our regional director. There are 1 million students there and right now during the pandemic, only 20 percent has access to the internet. The problem is our PBS, our Radyo Pilipinas, the transmitter is broken because it’s so old.)

He also said that PTV and IBC also have no reach in Region 10 due to broken transmitters.

(If our request is approved, we can solve this problem by having broadcasting facilities that will reach the more than 800,000 who don’t have access to the internet.)