Scores arrested in LA after violence in wake of Lakers win 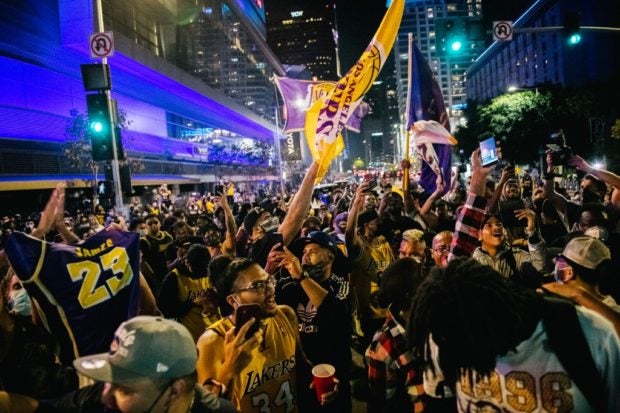 “What started out as a largely peaceful celebration of the Los Angeles Lakers NBA championship in downtown Los Angeles, turned into confrontational, violent and destructive behavior late last night,” the Los Angeles Police Department said in a statement.

It said that some 1,000 revelers gathered around the Staples Center, the Lakers’ home arena, after the team dominated the Miami Heat 106-93 to win the record-equalling championship.

“Unruly individuals mixed within the crowd began throwing glass bottles, rocks, and other projectiles at officers,” the statement said.

“That is when an unlawful assembly was declared, and only a limited number of people complied and began to disperse.

“A larger portion of the group broke off and began vandalizing businesses while continuing to engage in violent behavior, some aimed at responding officers.”

Authorities said more than 30 buildings were damaged in the ensuing violence and 76 people were arrested for vandalism, assaulting police and failure to disperse.

Video footage of the unrest showed police in riot gear firing non-lethal rounds at the crowd. Several people in response hurled objects at police and some tried to damage police vehicles.

Authorities had urged people not to gather downtown prior to the game because of restrictions linked to the COVID-19 pandemic and the fact that the game was not going to be retransmitted on screens outside the arena.