MANILA, Philippines—The Philippine military was likely to fall short of its target to complete the second stage of an upgrade program by the year President Rodrigo Duterte steps down from office, Defense Secretary Delfin Lorenzana said on Monday (Oct. 12).

“At the rate we are going, we can’t do it,” Lorenzana told senators at a budget hearing, speaking partly in Filipino. He said it could take the Third Horizon of the program to “complete our minimum credible defense.”

The upgrade program’s Horizon 2, with a timetable of 2018 until 2022, was designed to achieve a minimum credible defense capability for the Armed Forces of the Philippines (AFP). The Third Horizon stretches from 2023 to 2027.

Lorenzana said minimum credible defense meant the capacity “to face intruders” with sufficient hardware and arsenal “like ships, missiles so we won’t be bullied, or whatever you call that, they can just intrude in our territory without being challenged by our troops.”

He said the objective was to give the Philippine military capacity to go into a “stand off” with foreign intruders. “Not to fight but to protect our interests. Not for them to just intrude and we won’t have anything to face them with,” he said.

Lorenzana said he estimated that Horizon 2 of the upgrade program was only 25 percent complete.

“By 2022 we should have accomplished minimum credible defense posture,” said Sen. Panfilo Lacson during the budget hearing. “As how we’re doing right now, it’s only 25 percent when it should be half-way,” he said.

“So it’s impossible for Horizon 2 to be followed,” Lacson said.

A table presented at the briefing showed that only two out of 85 approved projects have been finished under Horizon 2.

The 85 approved projects cost P309.56 billion, but only P49.7 billion has been released so far, the table showed.

An amount of P82.03 billion has been released for the first horizon, with 30 projects completed.

For 2021, P38 billion has been allocated for the AFP modernization program, which included P5 billion expected remittances from the Bases Conversion and Development Authority. 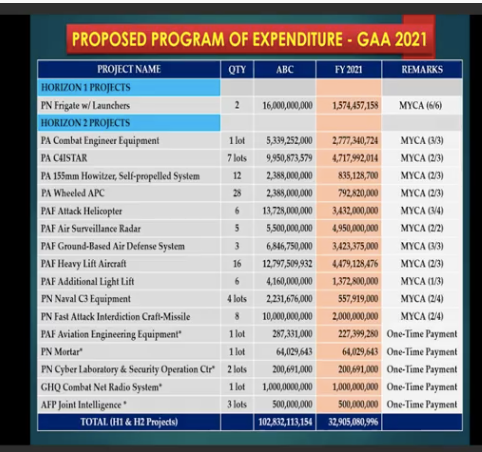 The proposed P4.5 trillion 2021 budget sought to restore P8 billion of funds to the defense department which had been diverted to COVID-19 response by the national government.

A total of P19.3 billion was cut from the defense department budget this year due to the pandemic, Lorenzana said, with P17.8 billion originally intended for the modernization program.

While P8 billion out of the P17.8 billion realigned fund will be returned to the defense department for next year, the P9.4 billion from the 2019 GAA that was cut from Lorenzana’s agency appeared to be missing.

“The P9.4 billion being utilized for multi-year obligations that was taken from 2019 has not been restored in the 2021 budget,” Lorenzana said. 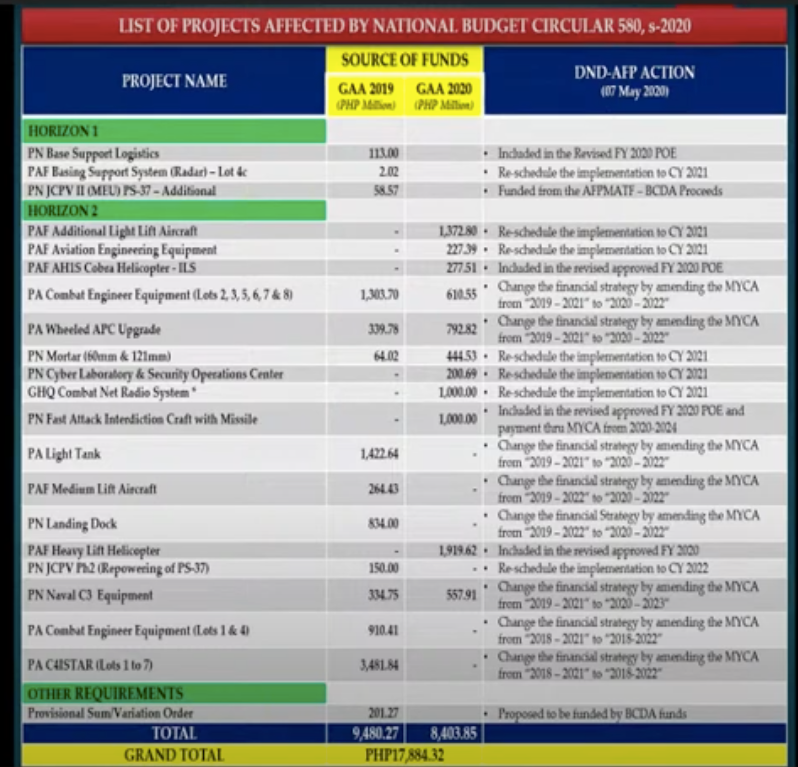 Projects covered by the P9.4 billion in funding were “ready for implementation but COVID-19 came,” said Lorenzana. The money has not been appropriated yet “so it stayed” with the Department of Budget and Management (DBM) and was added to P8 billion for defense in 2020 for a total of P17.8 billion.

Sen. Franklin Drilon questioned the status of the P9.4 billion allocation. “Is this authorization lost? Is that authorization no longer effective?” he said.

There was no representative from the DBM to address the senators’ queries.

Drilon, however, also raised concern over the DND’s inability to disburse the P9.4 billion allotted to it in the 2019 national budget.

“We are inclined to get to the conclusion that the absorptive capacity of the AFP must be reviewed by the good secretary so that these funds will not remain unspent,” he said.

The underfunded Philippine military, which is one of the most ill-equipped in the region, faces a set of challenges—from budget lack to security of the country’s vast waters.

The DND is proposing at least P208.71 billion for 2021. Lorenzana renewed his call to raise defense spending to 2 percent of the country’s gross domestic product to build a truly capable military.

He said he previously requested that defense spending be at least 1.5 percent of GDP. “It would have been good and we could increase as we go along to 2 percent,” he said partly in Filipino. “As you said we are just at over 1 percent. That money is really inadequate,” Lorenzana said.