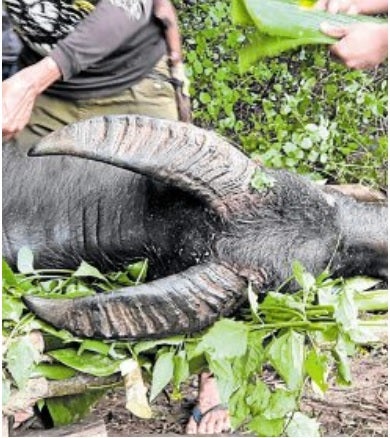 “Kalibasib,” the only tamaraw to survive for more than 20 years under a government program to captive-breed the critically endangered animal, has died.

Whether he would be the last one would depend on where government programs are headed as part of efforts to repopulate the endemic mammal, whose current population stands at 600 across Mindoro island.

“The important role Kalibasib had played was as an educator, an advocate,” said Annabelle Plantilla, project manager of the UN Development Programme Biodiversity Finance Initiative (Biofin).

Biofin has raised P1.15 million to help forest rangers and wardens affected by the pandemic to continue guarding the 106,655-hectare Mt. Iglit-Baco National Park, where the biggest tamaraw population is found.

For many years, tourists and even students owed it to Kalibasib to see a live tamaraw up close behind a wooden fence at the tamaraw gene pool, a 280-ha facility in the remote Barangay Manoot in Rizal, Occidental Mindoro.

Up close at gene pool

If the coronavirus had not happened, the Tamaraw Conservation Program (TCP) would have started its feasibility studies with the International Union for Conservation of Nature for a possible ex situ, or off-site conservation, and translocation of tamaraws in Mindoro provinces, said TCP coordinator Neil Anthony del Mundo.

“There are areas [in the wild] with only five to 10 tamaraws left and we fear [the population] might not survive without an intervention,” he said on Sunday.

Kalibasib, whose name is an acronym for “Kalikasan bagong sibol” (nature newly sprung), lived 21 years until Saturday. The average life span of the rare buffalo is 20 to 25 years.

“He was still able to eat bananas in the morning but when they came back around 2:30 pm, the rangers found him lying on the grass,” Del Mundo said of Kalibasib’s death, which came as enviromentalists marked Tamaraw conservation month.

Veterinarians will perform a necropsy but their initial findings showed the cause of death as old age. Kalibasib’s remains were preserved in a cold storage for taxidermy.

In 1980, the government opened the gene pool and brought in 20 adult tamaraws from the wild, among them Kalibasib’s parents.

Tamaraws at the facility eventually died from pests and diseases, with only Kalibasib left to survive this long.

The gene pool will keep operating as it also serves as a wildlife rescue and biodiversity research center.