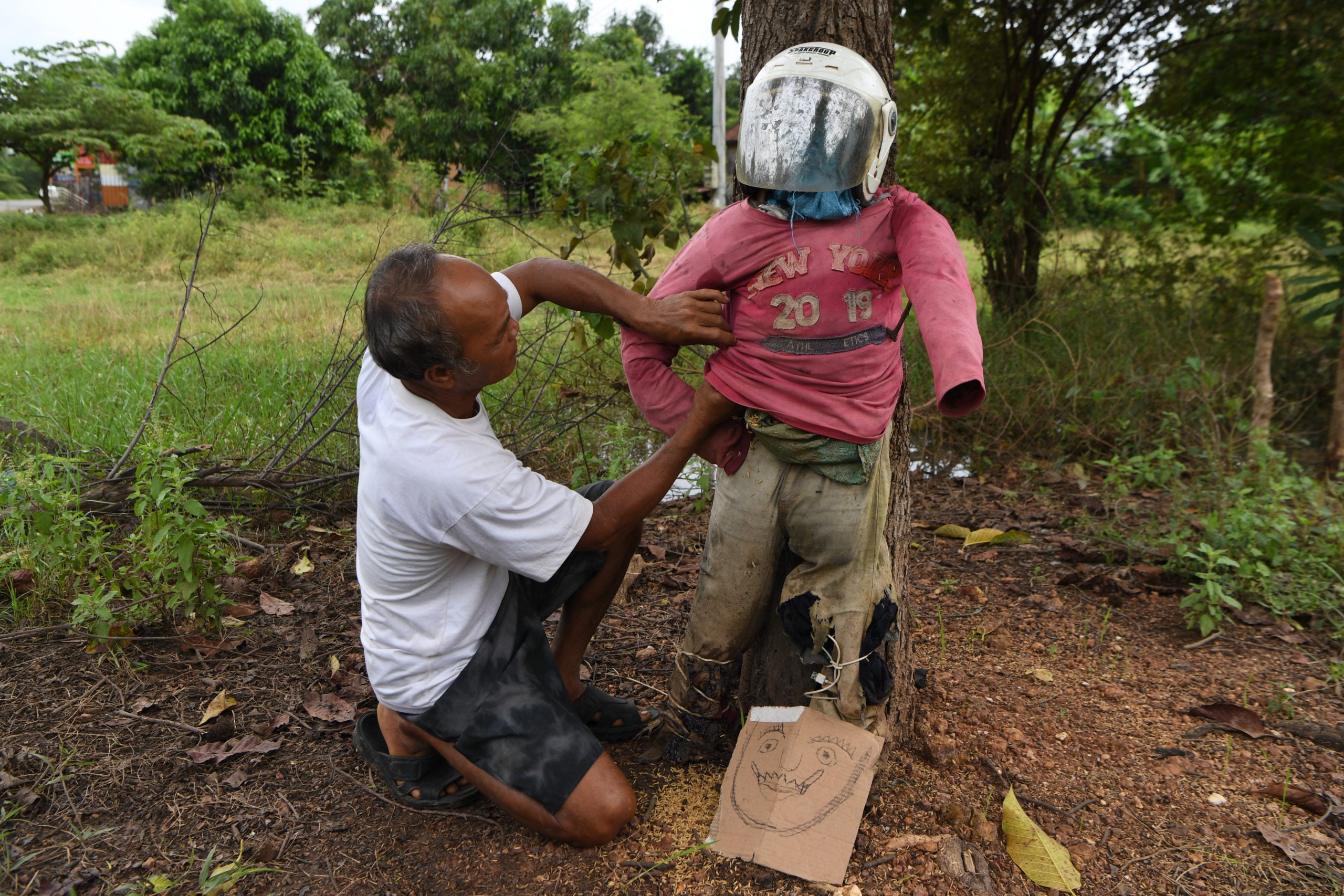 A man sets up a scarecrow in front of his home in Cambodia’s Kampong Cham province on October 11, 2020, as superstitious residents in the region set up the sentries known as “Ting Mong” in Khmer to ward off the COVID-19 coronavirus during the pandemic. (Photo by TANG CHHIN Sothy / AFP)

KAMPONG CHAM, Cambodia — Armed with a stick, a floral-shirted scarecrow with a plastic pot for a head stands guard in front of a rural Cambodian home — a sentry erected by superstitious farmers to ward off the coronavirus.

Known as “Ting Mong” in Khmer, the creatively rendered scarecrows often pop up in villages that have been hard-hit by infectious diseases like dengue or water-borne diarrhea.

This time, “I’ve set up the Ting Mong to prevent the coronavirus from threatening my family,” says farmer Sok Chany, 45.

She has two posted in front of her wooden stilt home in Kampong Cham province, about 110 kilometers (70 miles) northeast of the capital Phnom Penh.

The other is dressed in camo-green and has a stick propped like a rifle across its hay-stuffed chest.

“It is our ancient superstition to set up Ting Mongs when there are dangerous diseases or to avert evil,” she tells AFP.

The majority-Buddhist kingdom has a strong strain of animism incorporated into the daily lives and rituals of Cambodians, with many believing that spirits are tied to places, animals, and things.

The Ting Mongs are meant to ward off evil spirits wishing to bring harm to an unsuspecting family by spreading disease.

In Sok Chany’s Trapeang Sla village, no chances are taken — an effigy is tied to the gate of nearly every home, though constructed with varying degrees of effort.

Some are elaborately dressed in military uniform or floral pajamas, while others simply have stuffed bags with sunglasses perched on them for heads.

Farmer Ton Pheang stuffs old clothing up the arm of his Ting Mong, which is dressed in a bright pink shirt and has a helmet for its head.

“This is my second one — the first one broke,” the 55-year-old says, adding that his scarecrow has been standing guard under sun and rain since April when the outbreak started spreading rapidly across Southeast Asia.

“We’ve been fine since the outbreak,” Ton Pheag tells AFP. “I’ll continue to leave it up as long as COVID still exists.”

Cambodia appears to have escaped the brunt of the pandemic, registering just 283 infections and no deaths — though skeptics say the low toll could be due to a lack of testing.