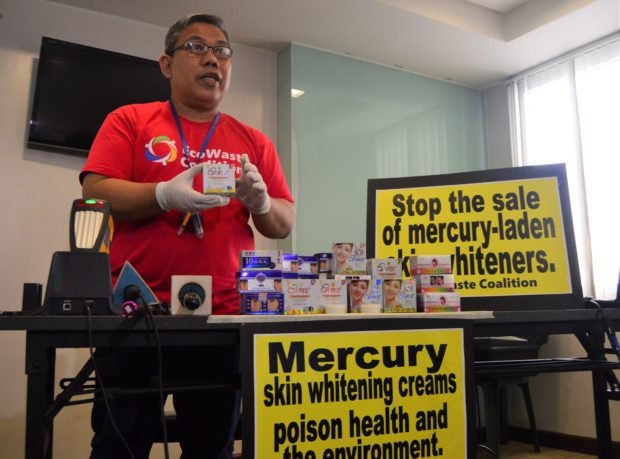 “It’s not only mercury-containing skin whitening cosmetics that are being sold online,” the EcoWaste Coalition said in a statement.

EcoWaste had previously raised concerns over the online sale of skin whitening products banned by health authorities for containing mercury compounds, which are forbidden in cosmetic formulations.

“We remind consumers to be cautious and alert to the dangers of buying and using mercury and mercury-added products that are illegally being offered for sale by online dealers,” said Thony Dizon, EcoWaste’s chemical Safety campaigner.

“Mercury is highly toxic,” he added.

Dizon advised consumers to “seek out mercury-free products” as he stressed the importance of “actively” supporting the enforcement of mercury-related policies and regulations, including the environmentally sound management of mercury wastes.

EcoWaste said it has already notified regulatory agencies, particularly the Environmental Management Bureau (EMB) and the Food and Drug Administration (FDA), regarding the “alarming use of digital commerce to vend mercury and banned mercury-added products in direct contravention of the country’s mercury policies and regulations.”

Further, the group said it also reported to the FDA Center for Device Regulation, Radiation Health and Research (FDA-CDRRHR) the online sale of mercury thermometers and sphygmomanometers, which it said violated an administrative order issued by the Department of Health in 2008 which phased out mercury-containing medical devices in September 2010.

To address the problem, EcoWaste called on the FDA to make a policy issuance reiterating the ban on mercury medical devices.

The group said the FDA-CDRRHR has committed to “facilitate the development of the requested policy banning or prohibiting the manufacture, importation, distribution and sale of thermometers and sphygmomanometers with mercury.”

In a separate letter to the EMB, which was co-signed by Ban Toxics and Health Care Without Harm, EcoWaste requested the bureau to “get to the bottom of the illegal online sale of liquid mercury, which may be diverted to uses prohibited by law such as mineral processing.”

The group cited an administrative order issued by the Department of Environment and Natural Resources which “prohibits the use of mercury and mercury compounds and mercury-added products for artisanal and small-scale gold mining and any other related mining activities” in line with Executive Order 79.

“EMB had informed the EcoWaste Coalition that it had prepared a memorandum to the bureau’s legal division,” the group said.