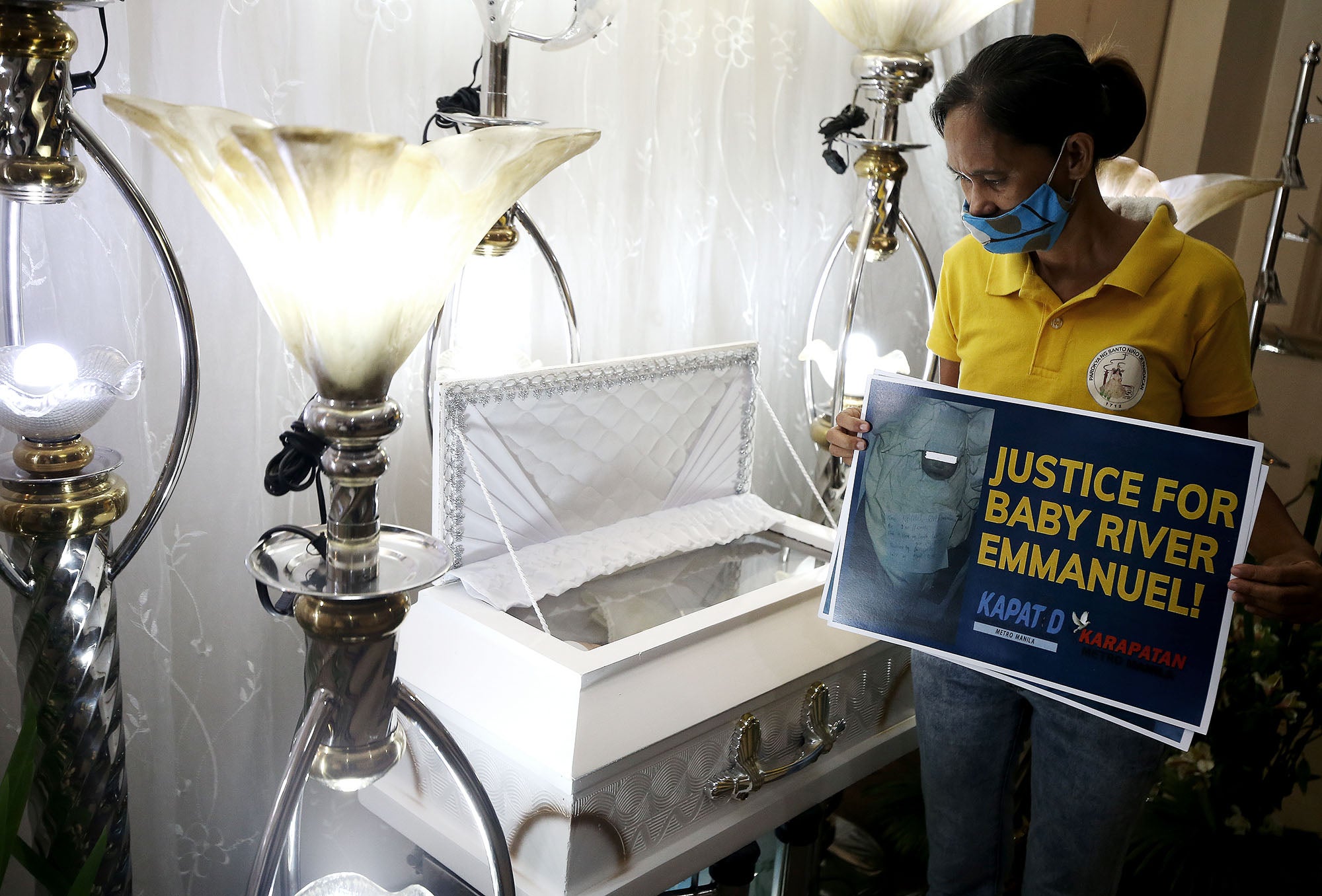 GOODBYE, BABY RIVER Marites Asis holds up a sign as she views the remains of her infant granddaughter Baby River Emmanuel Nasino at La Funenaria Rey in Pandacan, Manila. —RICHARD A. REYES

MANILA, Philippines — Three-month-old River, the baby at the center of a court battle for the temporary release of detained leftists, died at a hospital intensive care unit on Friday night, away from the arms of her mother, Reina Nasino, a political detainee at the Manila City Jail.

The infant died due to acute respiratory distress syndrome, two weeks after she was confined at the Philippine General Hospital for fever and diarrhea, according to Kapatid, a support group for the family of political prisoners.

River’s doctor said that the infant’s oxygen level severely dropped below normal and that her body was no longer responding to medication.

“Her death is on all of us,” lawyer Edre Olalia said. Olalia, president of the National Union of People’s Lawyers, filed a very urgent motion for furlough for Nasino before the Manila court hearing the charges of illegal possession of firearms and explosives against the young mother.

“Heartbreaking does not even come close to it. What kind of justice system, nay, society, do we have to let this inhumanity and injustice to mother and child happen?” Olalia said. “We have not only lost our hearts, we have lost our souls if we do not feel the pain and rage. We will lose our humanity if we see more Baby Rivers again!”

A coordinator of the leftist Kalipunan ng Damayang Mahihirap, Nasino was among the three individuals who were arrested for illegal possession of firearms and explosives in November 2019.

The Manila police carried out the search based on a warrant issued by Judge Cecilyn Burgos-Villavert of the Quezon City regional trial court (RTC) Branch 89.

The defendants’ lawyers had earlier asked the court to suppress the evidence seized during the raid and to quash the search warrants, but Judge Marivic Umali-Balisi of the Manila RTC Branch 20 denied the motion in July for lack of merit.

Shortly after her arrest, Nasino gave birth to an underweight Baby River at the Fabella Hospital on July 1. Nasino asked the presiding court to let her nurse the child at the hospital or at the Manila City Jail Female Dormitory’s child-care facility until the infant turns a year old.

Balisi denied the motion, citing the jail warden’s comment that the jail did not have a facility for the infant and the depleted manpower could not escort Nasino and her child to Fabella Hospital.

Nasino was also ordered to give up her baby to the father of the child or a relative. They were separated on Aug. 13 after Nasino decided to hand Baby River over to her mother.