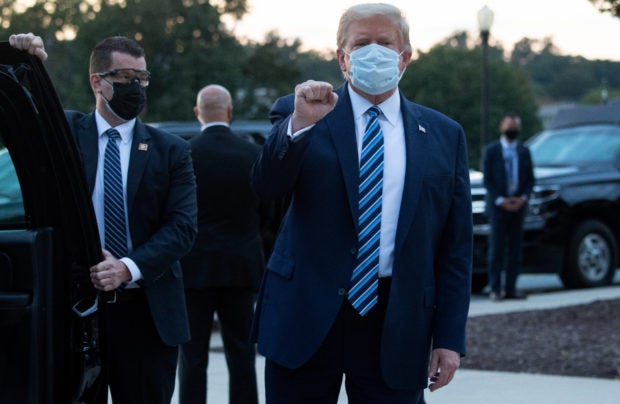 (FILES) In this file photo taken on October 05, 2020 US President Donald Trump pumps his fist as he leaves Walter Reed Medical Center in Bethesda, Maryland heading towards Marine One, to return to the White House after being discharged. – President Donald Trump should be able to resume “public engagements” from October 10, 2020, the White House physician announced on October 8, saying the US leader has responded “extremely well” to Covid-19 treatment. (Photo by SAUL LOEB / AFP)

WASHINGTON, D.C. –  US President Donald Trump said he was “medication free” and revealed more details of his fight with Covid-19 in a televised interview aired Friday, one week after he was hospitalized with the virus.

“Right now I’m medication-free, I’m not taking any medications as of, you know, probably eight hours ago,” Trump told Siegel.

It was unclear when the interview, which Carlson said was filmed by a White House camera crew, was taped.

Trump’s doctors had previously said they have given him an aggressive cocktail of therapeutic drugs including the steroid dexamethasone, usually associated with serious Covid-19 cases.

Trump also said he had been tested again for the virus.

“I have been retested and I haven’t even found out numbers or anything yet but I’ve been retested, and I know I’m at either the bottom of the scale or free,” he said.

He said he did not know when his next test would be, adding that it was “probably tomorrow… they test every couple of days.”

He also said he “didn’t have a problem with breathing.” His doctors have said he was put on supplemental oxygen at least twice, and the president later said that lung tests had shown “some congestion in there.”

Trump said he did not know where he had contracted the virus, adding: “It’s highly contagious. That’s one thing you learn, this is a contagious disease.”