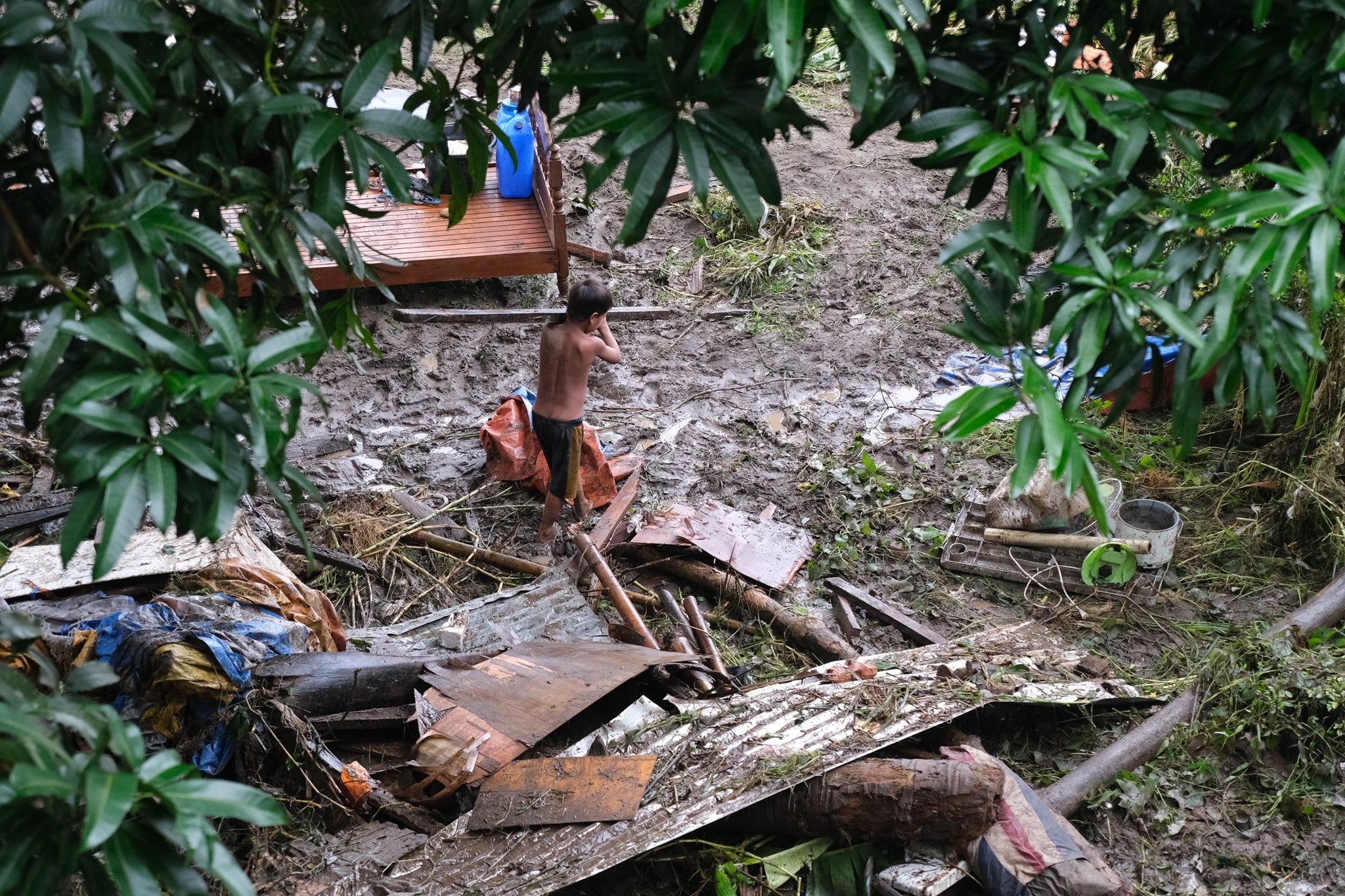 LUCENA CITY—Heavy rains that caused the Iyam and Dumacaa rivers in this city to overflow triggered two successive flash floods on Thursday and Friday, causing almost 500 families to flee their homes.

Janet Vargas Gendrano, head of the City Disaster Risk Reduction and Management Council (CDRRMC), reported that at least 475 families composed of 1,312 individuals were temporarily sheltered in several evacuation centers, and houses of relatives and friends in 10 affected villages.

She said local rescuers conducted the evacuation after the twin rivers swelled from heavy rains early Thursday morning.Houses along the riverbanks were inundated with mud and water, which cascaded from the Mt. Banahaw where the rivers originate.

The water in some areas rose neck-deep but Gendrano said there were no reported casualties or injured flood victims.Lucena’s central area is wedged between the Dumacaa River on the east and the Iyam River on the west. The waterways meet on the southern portion of the city and flow to the Tayabas Bay.

Gendrano said the evacuees during the first flooding incident were immediately brought to safety.

“They were ordered to stay until the bad weather passes,” Gendrano said in an interview at the CDRRMC office Friday.

Since Tuesday, the Philippine Atmospheric, Geophysical and Astronomical Services Administration has been issuing flood alert due to the combined influence of the southwest monsoon or habagat, and a low-pressure area.

The order to remain at the evacuation centers turned out to be a blessing for the evacuees after another devastating flash flood along the two rivers happened at dawn on Friday.

“We’re lucky that we were forced to stay here. We were not allowed to return home even if the swollen river had already subsided on Thursday afternoon,” Susan Yago, 50, who lives along the banks of Iyam River in Barangay 5, told the Inquirer in an interview at the Punzalan gym evacuation center.

“If we have returned, we could have been in serious danger with the second flash flood,” she added.

Yago said all their properties that were spared from the first flood were all washed away during the second flooding incident that started at 2 a.m.

“Pots, utensils, clothes, electric fans television, they were all carried away by the raging river. What was only left to us is the clothes that we’re wearing,” she said.

“I was awakened by the cold and muddy water that already reached our bed,” Jwalter Marquez Ladera, a photographer and employee of the provincial government, said of Friday’s flood.

Ladera immediately led his wife and three children to safety at the second floor of his parent’s house along the Dumacaa River in Barangay Ibabang Dupay. The floodwater reached more than 3 feet high, damaging all their appliances and personal belongings at the ground level.Some schools in low-lying areas along the riverbanks were heavily flooded during the second incident.

Netizens posted photos of school rooms with books, printed modules and other equipment destroyed by the floodwater.

Mayor Roderick Alcala, health workers and staff of the local social welfare office have been making the rounds of the affected areas to bring relief aid to the flood victims.

“Our top priority is to prevent the spread of the virus (new coronavirus disease or COVID-19) among the evacuees. We will bring them face masks and other protective equipment,” Alcala said in a phone interview.

Alcala also assured the student flood victims that all destroyed and wet self-learning modules will be replaced by their teachers.

The affected schoolchildren said all the modules they received from their teachers several days ago were also washed away by the floods.

“Even our face masks and face shields were also washed away. While others are still wet,” said a youngster.

Gendrano said the presence of evacuees pose as a challenge to authorities.

“This was the first throng of evacuees during the pandemic. And we’re all dealing with it along with the police and health workers on how to maintain all safety protocols,” she said.

She said the barangay health workers were the first line of defense to prevent the spread of the virus among evacuees.