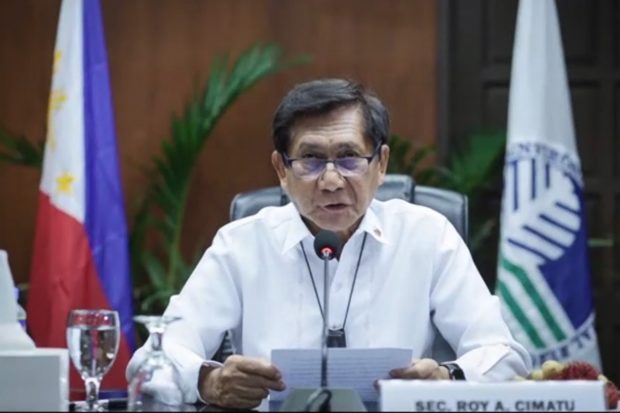 Environment Secretary Roy Cimatu defends the proposed 2021 budget of the Department of Environment and Natural Resources on Friday, October 9, 2020, at the Senate. (Screengrab/Senate PRIB)

“It has failed repeatedly to meet its targets year-on-year, the national government has given billions to this program,” added Marcos, even saying that the Commission of Audit has constantly flagged the said program.

Marcos raised this concern as she noted that DENR’s enhanced national greening program got a 60-percent increase in its proposed allocations from P3.15 billion this year to P5.15 billion for next year.

The National Greening Program or NGP is an initiative launched in 2011 that sought to plant 1.5 billion trees on 1.5 million hectares of land in six years from 2011 to 2028.

Still, Marcos pointed out that the country’s forest cover is constantly diminishing.

The Philippines’ forest cover is the lowest in Asia at only 23 percent, DENR Secretary Roy Cimatu also told senators.

“Every year we put billions into this project for almost a decade. Everywhere in the Philippines, we know that the forest cover has been severely diminished or compromised,” Marcos stressed.

Wagan said the DENR shifted its NGP strategy from people’s organizations-approach to a design that involves families to foster better stewardship.

“The reason why is we would like to engage the upland communities or upland families,” the DENR official said, noting that the agency shifted to this kind of approach last year.

“This is being done nationwide already. Secretary Cimatu has already provided the guidelines for this. We have the technical bulletin for our people in the field to follow and to guide them,” she added.

Marcos requested the DENR to provide the Senate a breakdown of how the agency intends to spend its proposed 2021 allocation for NGP.

“Give us a breakdown of how you intend to spend this very large increase of 60 percent for the national greening program which has been poorly-rated over the decades in order to justify the increase,” the senator said.

“I want you to prove me wrong. I am very keen to be mistaken because this has been crashing great disappointment to all of us,” she added.

According to Cimatu, he made a “drastic” policy shift in the DENR’s implementation of the NGP.

“I had made a drastic policy on this National Greening Program because I think it was too ambitious. Padamihan ng hectares ang pinaguusapan,” he said.