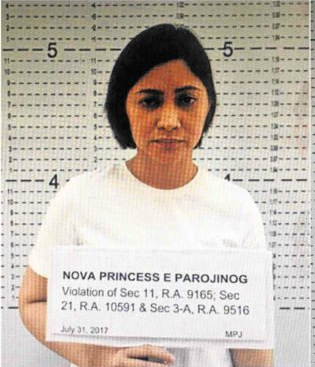 MANILA, Philippines — The chief of the Philippine National Police (PNP) Custodial Unit was relieved from his post and slapped with a criminal complaint for allegedly sexually assaulting former Ozamiz City Vice Mayor Nova Princess Parojinog while in detention in Camp Crame.

“That’s basic, because there was an incident, a complaint by Nova Parojinog,” PNP spokesman Col. Ysmael Yu told INQUIRER.net  Friday about the move to sack and send Lieutenant Colonel Jigger Noceda to assign him to a police holding unit.

Parojinog was arrested after a pre-dawn raid on July 30, 2017, where his father, former Ozamiz Mayor Reynaldo Parojinog, and six others died in San Roque Lawis in Ozamiz City.

Nova Princess has since been detained at the Philippine National Police Custodial Center, facing illegal drugs and firearms possession charges.

In a text message to INQUIRER.net, Quezon City chief prosecutor Vimar Barcellano confirmed that they received a complaint of rape, acts of lasciviousness, unjust vexation and violation of Safe Spaces Act against Noceda, but he did not further give details into the case.

On June 9, Noceda allegedly kissed the former vice mayor, while on September 7 the police official purportedly touched her private parts, the report added.

Yu said that a criminal complaint was filed Wednesday against Noceda by the Women and Children’s Protection Center  (WCPC) before the Quezon City Prosecutors Office.

The police force spokesman added that the WCPC “is already on top of the situation and they have already taken action.”

Noceda is now in the custody of  the Headquarters Support Service (PNP-HSS) while awaiting development of the case, Yu said.

“Kapag mayroong administrative sanction diyan… they will be under administration. Member pa naman sila ng PNP so under the disciplinary authority ng PNP doon sa direct superior niya. Like the HSS, hawak ngayon siya,” he said when asked where Noceda is staying.

(When there is an administrative sanction, they will be under administration. He is still a member of the PNP so under the disciplinary authority of the PNP, at his direct superior. Like the HSS, it is taking him under custody.)

President Rodrigo Duterte had tagged the Parojinogs in the illegal drug trade operations in Mindanao.

In a phone interview with INQUIRER.net, a source from Women and Children’s Protection Center (WCPC) said the events of reported sexual harassment occurred twice on June 9 and on Sept. 7 this year.

The source, quoting Parojinog’s affidavit, said the victim was at the office of Nocedo, who asked her for a selfie and reportedly kissed the former vice mayor.

(It was on June 9 when Noceda kissed the victim. It was June 9, she was inside the office of Noceda. Noceda asked for a selfie then he kissed her.)

The WCPC source also noted that there were times that the PNP Custodial chief was jealous if Parojinog was seen talking to a duty police officer at the custodial center.

The source even noted that one of the duty policemen who talked to the victim was ordered to transfer in another area of the Custodial Center.

On Sept. 7, Parojinog had asked to talk to Noceda about a pending case from the court so that she could consult her lawyers for “needed remedy.”

Parojinog then arrived at Noceda’s office about her concern. After their talk had finished, that was when the police official pushed Parojinog to the wall and purportedly touched her private parts.

INQUIRER.net sought comment from Noceda regarding the allegations but has not replied yet as of posting.