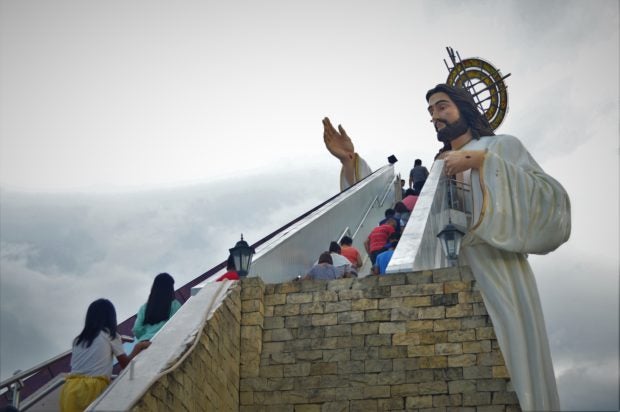 FAITH CLIMB. Devotees climb the stairs leading to the topmost part of the statue of Jesus Christ at the Divine Mercy Shrine in El Salvador City, Misamis Oriental, in this photo taken before the coronavirus pandemic. The site has reopened since October 1, although the number of visitors allowed inside in a given time is limited. (Photo by Jigger J. Jerusalem).

CAGAYAN DE ORO CITY –– The local government of El Salvador City in Misamis Oriental has allowed the reopening of a religious pilgrimage site starting October 1 to jumpstart tourism and revive a major driver of its economic growth.

The city is known for its Divine Mercy Shrine, which sits on a nine-hectare hill in Ulaliman village overlooking the scenic Macajalar Bay.

Its main attraction is a 50-foot high statue of Jesus Christ with stairs to allow pilgrims to climb up and down.

The shrine’s church, which can accommodate up to 3,500 people at one time, is also a major attraction due to its devotional chambers and sections.

FEATURED STORIES
NEWSINFO
Class, work cancellations due to Typhoon Quinta
NEWSINFO
Rosario Domagoso, mother of Manila mayor, dies at 74
NEWSINFO
DFA’s Locsin to Angel Locsin’s critics: ‘Anyone who messes with her will get it’

But Mayor Edgar Lignes said they only allowed the shrine management to accommodate up to half of its capacity in keeping with current health protocols to prevent the spread of the coronavirus disease (COVID-19).

Lignes said the city government has also approved the reopening of beaches, but not swimming pools.

“We have Bantay Dagat volunteers who keep watch and ensure that health protocols are followed,” Lignes assured.

The tourism industry in northern Mindanao is starting to rev up after establishments completed the required adjustments in their facilities, said Mylah Faye Cariño, director of the National Economic and Development Authority (NEDA).

As of Sept. 29, she said, authorities have given the green light for the reopening of 281 tourism-related firms, like resorts and restaurants, throughout the region. Scores of others were being assessed for compliance with the new operational standards, Cariño added.

However, more than 80 establishments have declared temporary closure.

NEDA placed tourism losses during the April and May lockdowns at some P1.3 billion. In July, the labor department counted some 2,500 tourism jobs lost due to downsizing and closure.

Cariño hoped that the adoption of a ‘bubble’ concept akin to Boracay would boost the region’s tourism rebirth.

She said agencies comprising the economy cluster of the regional task force against COVID-19 were set to finalize the concept’s adoption for northern Mindanao.

The idea is to start among inter-provincial tourists, and then when the situation warrants, open the sites to visitors from other regions.

It took some time to iron out the roadmap because “our local governments understandably wanted to be more cautious,” Cariño explained.

The region has attracted three million visitors in 2019, buoying up the growth of its tourism industry and generating thousands of jobs that, in turn, disappeared during the lockdowns.