Duterte to promote mask use, health measures in ad 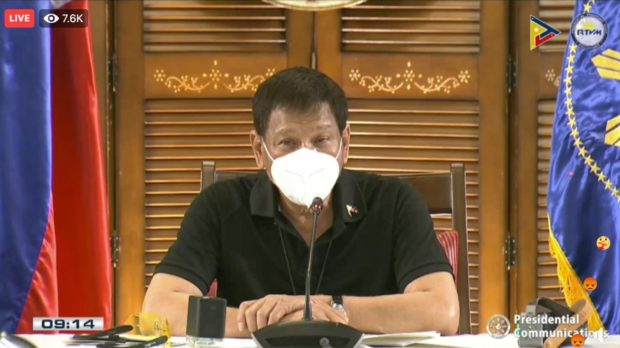 MANILA, Philippines—President Duterte will appear in an advertisement to help promote minimum health protocols in an attempt to arrest the spread of COVID-19 in the country, his spokesperson Harry Roque said in a digital press conference on Oct. 8.

“The President will appear in an advertisement to promote the wearing of masks, washing of hands, and social distancing to boost public confidence and consumer confidence,” Roque said at the launch of the “Ingat Angat Tayong Lahat” campaign via remote conferencing from his car.

The campaign is a private sector initiative endorsed by the inter-agency task force on COVID-19 (IATF) to boost consumer confidence as the government slowly reopens the economy after more than half a year since imposing quarantine measures in March.

“No one expected COVID to happen but it showed the ‘bayanihan’ spirit of the Filipino, as shown by the private sector who donated isolation centers, medical equipment and testing kits, some came earlier than the government response,” Roque added.

The Palace official said the campaign assumes a more important role in the economy because currently “there is fear in the hearts and minds of the Filipino people.”

He, however, declined to elaborate on the format, additional content, distribution, and production of the said advertisement where the President is expected to appear.

Meanwhile, Roque stated that as the government moves to ease restrictions on work and leisure facilities the IATF has endorsed the resumption of motorcycle-taxi Angkas’ operations. The mass transportation sector will also start to implement an every-other-seat apart seating policy for passengers, and the volume of public vehicles will be increased to accommodate the expected rise in citizens traveling to offices and commercial establishments.

“Also, on Monday, we will have a full Cabinet meeting. The topic would be how to save people from poverty,” he added.

Department of Trade and Industry (DTI) Sec. Ramon Lopez likewise trumpeted the ‘bayanihan’ spirit of the Filipino, and thanked the private sector for initiating a campaign for yet another measure to help the government address the needs of the citizens.

“We should focus toward consumer confidence, balancing health and economy,” he said at the digital press conference.

“The virus will be here. We have to manage it, not avoid it. To really help the revival of the economy, we should stimulate back demand,” Lopez continued, appealing to the public to “buy local” as Filipinos go to the “new normal.”

IATF chief implementor Sec. Carlito Galvez Jr. echoed the appeal to the private sector to continue supporting the government as it prepares to fully open the economy, citing the companies’ assistance in boosting testing capacities, treatment, and the procurement of personal protective equipment (PPE) for frontline health workers.

“We cannot afford to hold our guard down. It’s an equilibrium of both health and economy,” he said.

Roque, Lopez, and Galvez were one in saying that the economy may be safely reopened as long as the public would maintain minimum health protocols.

Ayala and Royeca discussed Task Force T3 established in April to ramp up “testing, tracing, and treatment” of cases.

Royeca said the people should no longer have to choose between “buhay o hanapbuhay” (life of livelihood) because the economy sank as businesses were closed to prevent the spread of the virus.

“As T3 grows larger, it is the private sector’s job to revive the economy, and transform the mindset of the people in order to share the same vision,” he said.

The task force has also evolved to mean “teach, transform, trust” as the country prepares to go to the “new normal,” Royeca continued.

“We set aside our differences for the future of the country,” she explained. The brands will only serve as backdrops for the information initiative, and will not be actively selling goods or services through the campaign materials.

“The emotions are important. You should feel inspired by the Filipinos’ resilience. There’s ‘malasakit’ (compassion) through vigilance,” Torres said of the campaign which will be released on Oct. 9

across different media platforms, and targets the upper to middle class consumers.

Aside from materials with a more general approach, the campaign will also release versions for the most affected industries, such as restaurants, mobility, and shopping and leisure.

A Viber group will also be launched to help amplify the campaign’s message.