MANILA, Philippines — The chief of National Capital Region Police Office (NCRPO) said Grab driver Mary Florence Norial, who was arrested for reported assault, had “threatened” and “bullied” the law enforcer during a confrontation along a driveway of a coffee shop in Taguig City.

On Oct. 5, Norial was detained after she had a heated confrontation with Police Captain Ronald Saquilayan, chief investigator of Pateros police, near a coffeeshop.

In an initial probe, NCRPO chief Maj. Gen. Debold Sinas said Saquilayan was asking the security guard of the coffee shop that he is still waiting for his daughter to finish buying food but Norial was persistent to ask the policeman to leave the driveway.

(Saquilayan talked to the security guard and said: “please advise that they need to line up again because we have yet to get the items that we bought” but Norial was persistent. Norial even called her sibling. Then, the police responded that he has some things he needs to fix.)

(So now of course the woman was threatening, based on the statement of the policeman, “Okay since you’re a policeman, I will report you to the media or even to “Tulfo.” The policeman was irritated because it is as though he was being threatened and bullied so Norial was arrested and was brought to the station.)

(She was not, according to police, she was not harassed, it was her who did the harassment first.)

Mirza Miguel Shahzad, Norial’s partner, said he was surprised by the allegation, noting that they did not threaten Saquilayan. 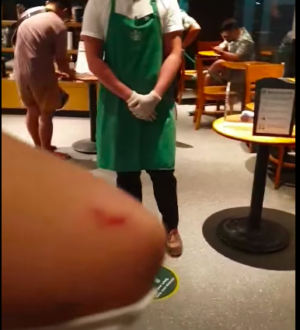 “‘Yan nga po ang new development na nagulat kami. ((That’s the new development which we were surprised.) We did not threaten them. We took the videos for our safety and our evidence as we already felt unsafe being with the police,” he told INQUIRER.net when sought for comment about Sinas’ remark that it was Norial who harassed and threatened the police officer.

Norial is still detained at the Barangay Ususan, Taguig police station while the Taguig prosecutor’s office has yet to release a resolution on her case.

In a Facebook post on Tuesday, Norial said she was allegedly harassed by the policeman. She said Saquilayan hit her with his car door.

Nonetheless, Sinas said they will also look into the possible abuse of Saquilayan in the incident regarding the statement of the Grab driver.

(For us, we will investigate if the policeman did commit abuses or wrongdoings based on the female Grab driver’s post.)

Sinas said Saquilayan already denied harassing the female driver, who alleged that she was struck by the car door.

(Saquilayan said he did not hurt the woman. He added that he was inside the car wearing civilian clothes. He could not remember what he did.)