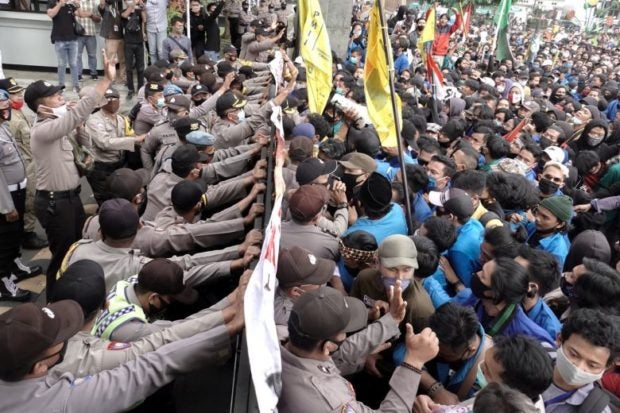 Demonstrators clash with police officers following a protest against the government’s labor reforms in Banyumas, Indonesia, on Oct 7, 2020. REUTERS via The Straits Times/Asia News Network

JAKARTA — Police arrested hundreds of protesters and used water cannons and tear gas to disperse crowds, as thousands continued to demonstrate across Indonesia for the second day running on Wednesday (Oct 7) against a new labour law.

According to Reuters, nearly 400 people were detained on Wednesday, after protesters rallied outside parliament in Palembang in South Sumatra, and in the capital Jakarta.

The new law, passed in Parliament on Monday, was touted as necessary to attract foreign investments and create jobs to redress a pandemic-battered economy.

Indonesia – South-east Asia’s largest economy – has been trying to even the keel with neighboring countries in terms of how flexible their labour law is when it comes to hiring and firing.

Critics say this disincentivizes formal hiring and weakens workers rights. The law has also been slammed for reducing environmental protections.

Officers in riot gear have been battling protesters since Tuesday, predominantly in the most populous island of Java, where many industry centers are located.

Meanwhile clashes in Bandung intensified, as police used water cannon and tear gas to push back protesters who tried to break into the local parliament compound.

Footage from the Javanese city of Semarang showed angry protesters tearing down the fence of the local parliament complex, according to Reuters.

In downtown Samarinda, the capital of East Kalimantan province, several hundreds of laborers took to the streets on Wednesday morning, carrying flags and banners that read “bring down the job creation law”.

Industry minister Agus Gumiwang Kartasasmita told employers to have “intense dialogues” with union leaders to remind them of the risk of Covid-19 spread among large crowds of protesters, which could in turn lead to new clusters.

He also stressed that the industrial sector should run uninterrupted at optimal performance, especially as the country clambers to make an economic recovery following the hit from Covid-19.

“Employers and employees must promote synergy and hard work is increasingly needed to maintain investors’ and buyers’ confidence,” Mr Agus said in a circular sent to companies.

Coordinating maritime affairs and investment minister Luhut Pandjaitan said on TVOne on Tuesday night that the new labor law would benefit Indonesian labor force as a whole, as it would attract new foreign investments and provide jobs to the unemployed.

The government said misinformation about details of the new law had fueled anger and needs to be clarified.

The economic slump due to Covid-19 pandemic has, according to early estimates, wiped out more than 3.7 million jobs in Indonesia, bringing the estimated total of the unemployed to 10.6 million, or nearly 8 percent of the 133 million workers in the country.

“No government would want to disadvantage its own people. I appeal to all labour unions… Please use your heart. During this pandemic, (street protests) could cost lives… and jeopardize the operations of the companies that pay laborers’ wage,” Mr Luhut urged.