Journalists and aid workers: US hostages killed by Islamic State 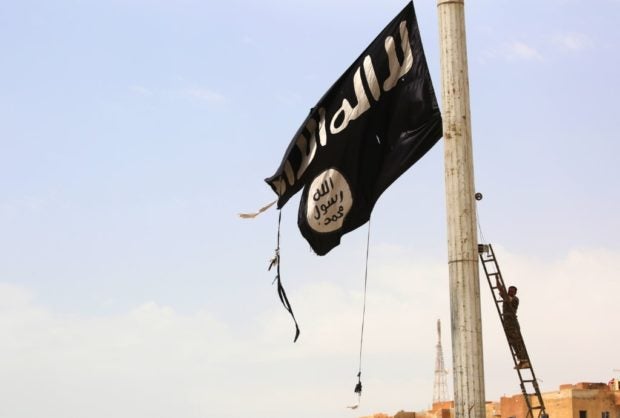 (FILES) In this file photo taken on April 30, 2017 A member of the US-backed Syrian Democratic Forces (SDF), made up of an alliance of Arab and Kurdish fighters, removes an Islamic State group flag in the town of Tabqa, about 55 kilometers (35 miles) west of Raqa city as they advance in their battle for the group’s de facto capital. Photo by DELIL SOULEIMAN / AFP

WASHINGTON — US journalists James Foley and Steven Sotloff, and aid workers Peter Kassig and Kayla Mueller, were among Westerners taken hostage and killed by the so-called Islamic State group in Syria.

Two members of an IS cell dubbed the “Beatles” were due to appear by video link in a US court on Wednesday, charged with involvement in their murders.

James Foley was kidnapped on November 22, 2012 in northern Syria with British Sunday Times journalist John Cantlie, who is still missing.

A writer and videographer, Foley, 40, covered the uprising against Bashar al-Assad’s regime for various media, including Agence France-Presse (AFP).

Raised in New Hampshire, the former schoolteacher had experience in war zones after covering conflicts in Iraq and Libya.

He was the first American journalist and the first in a series of hostages murdered by IS, which released extremely violent propaganda of the executions.

On August 19, 2014, IS posted a video online showing a masked, black-clad man beheading him in retaliation for the US strikes in Iraq.

The head of the cell responsible for his death, Mohamed Emwazi — nicknamed “Jihadi John” — appeared at the end of the video. Emwazi was killed in a US airstrike in Syria in November 2015.

A foundation that bears James Foley’s name was created by his mother, Diane. Its mission is to advocate for American hostages and to promote journalist safety.

Steven Sotloff, 31, was captured on August 4, 2013, north of Aleppo where he was covering the refugee crisis.

Familiar with the Middle East after working in Yemen, Libya and Egypt, he wrote for Time and Foreign Policy magazines.

Originally from Miami, he was the grandson of Holocaust survivors and had dual US-Israeli citizenship.

His family and the Israeli government kept his kidnapping secret for a year to try to assist his safe return.

But he was paraded in the video of the murder of James Foley. His mother, Shirley, then implored IS to free him in a video in which she said her son had no control over the actions of the US government.

He was beheaded in early September 2014 in an execution in which Jihadi John appeared.

Peter Kassig, 26, was the head of a small NGO that distributed food, clothing and medicine to Syrian refugees when he was kidnapped on October 1, 2013.

From the state of Indiana, in the US Midwest, he had briefly fought in Iraq as a US Army ranger before becoming an aid worker in Lebanon and then in Syria.

According to his family, he said he had found his “vocation” in helping Syrians who were victims of the war. His NGO had trained around 150 civilians in medical skills.

In November 2014, IS claimed responsibility for his execution in a video in which a masked man identified as Jihadi John appeared, standing next to a severed head.

The same video showed the simultaneous beheadings of around 15 men described as Syrian military personnel.

Kayla Mueller, a young humanitarian and activist from Arizona, was abducted in Aleppo, northern Syria, in August 2013.

After leaving a Medecins Sans Frontieres (Doctors Without Borders) hospital, where she visited with a friend, she was detained as she headed to the bus station to leave for Turkey.

IS claimed, without offering any proof, that she was killed in an air strike near Raqqa, Syria by a Jordanian plane in 2015, when she would have been 26.

Mueller’s parents, who live in Prescott, Arizona, said their daughter had devoted her career “to helping those in need in countries around the world” since graduating from Northern Arizona University in 2009.

She had worked with humanitarian aid groups in northern India, Israel and the Palestinian territories, before returning home to Arizona in 2011 and working at an HIV/AIDS clinic and a women’s shelter.