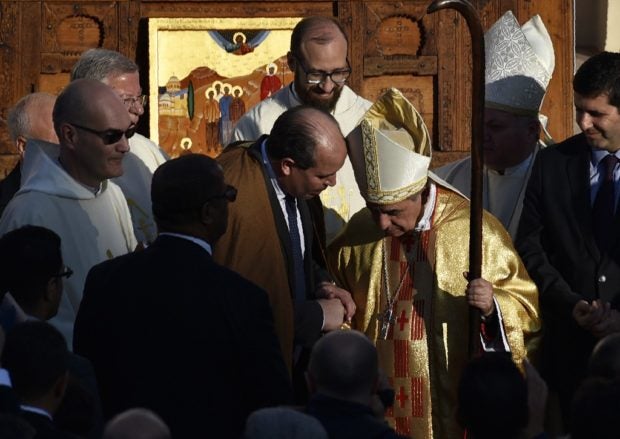 Mohammed Isa (C-L), Algerian Minister of Religious Affairs and Endowments welcomes then Papal envoy Cardinal Angelo Becciu (C-R) at the Chapel of our Lady of Santa Cruz in Algeria’s northern city of Oran, where seven French monks and 12 other clergy killed during the country’s civil war were beatified, on December 8, 2018. Becciu has resigned his post amid a financial scandal in his office. Photo by RYAD KRAMDI / AFP

VATICAN CITY — A 39-year-old Italian woman confirmed Wednesday that she received 500,000 euros ($590,000) from the Vatican via influential Italian cardinal Angelo Becciu, forced to resign by the pope last month following accusations of embezzlement and nepotism.

“I didn’t steal a single euro,” Cecilia Marogna told newspaper Domani of the payments in tranches of tens of thousands of euros to her company based in the Slovenian capital Ljubljana.

Rather, “I have a letter from the cardinal giving me the right to travel and conduct diplomatic relations to help the Church in difficult countries,” she said, claiming to know “senior members of the Italian secret services”.

Marogna, 39, is like the 72-year-old Becciu a native of the Italian island Sardinia.

The payments to her came while Becciu was number two in the Vatican’s Secretariat of State, which manages the Church’s vast donations.

He has been accused of syphoning off funds destined for the poor to family members — a charge he denies.

Marogna denied being Becciu’s “mistress,” claiming that she is a “political analyst and intelligence expert” and developed “a network of relationships in Africa and the Middle East” to protect the Vatican’s representatives abroad.

Investigative TV program Le Iene broadcast some of them showing spending of 200,000 euros on luxury products, including 8,000 euros at Chanel and 12,000 euros with Frau for an armchair.

“I think I have the right to buy myself an armchair after all that work!” Marogna said, claiming that she is an innocent victim of internal power struggles at the Holy See.

She added that some of the money had gone on a handbag she gave to the wife of a Nigerian friend, who she said had advised her on the dangers Vatican missions in African countries faced.