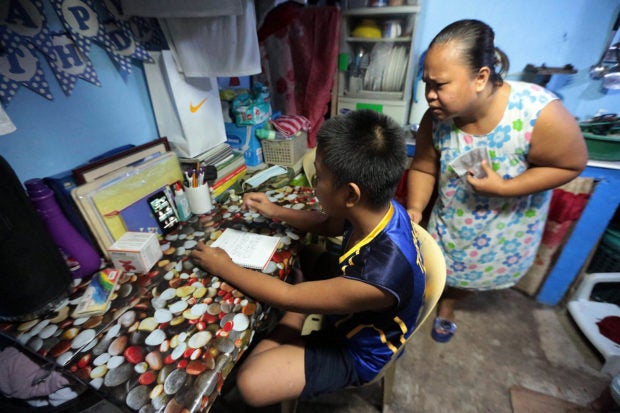 PARENTAL GUIDANCE Grade 7 pupil Mark Joseph Tabago uses a borrowed mobile phone as a means to confer with his teacher from his home in Barangay Pinyahan, Quezon City, on Wednesday. Looking on is his mother, Emily Tabago, who opted for the modular learning method because the family did not have money for electronic gadgets needed for online classes. —GRIG C. MONTEGRANDE

No, it was not college English but Grade 4 English that the 2019 graduate of information technology confronted while assisting his young cousin, Simon, on Tuesday.

Shin’s uncle, the boy’s father, also could not understand the questions on the learning module that all of them were reading on the website of the Department of Education (DepEd).

Shin did not say what the questions were, but they were too difficult even for an adult like him to figure out.

Shin and Simon’s parents resorted to answering the questions themselves to meet a 10-minute deadline and two attempts to submit the correct answers.

There was no interaction between the teacher and the student who may want to clarify the questions, he said.

Shin is acting as one of the guardians of his Grade 4 and Grade 2 cousins, both boys, who are among the 400,000 students who were forced to transfer from a private to a public school due largely to the economic problems caused by the pandemic. Their father, a car company driver, was retrenched.

Shin was worried that his cousins might not learn anything this year as the subjects appear not to be taught appropriately through the remote learning system they had experienced.

This situation could promote “distance cheating” among students who may submit some homework that were actually accomplished by someone else. The DepEd, however, is appealing to parents and guardians to teach honesty to the children, especially now that they have the opportunity to closely supervise the students.

But guardians like Shin point out that students are pressured to meet weekly deadlines to submit their self-learning modules for their teachers’ evaluation.

There was also the problem of logging in to DepEd Commons, the online platform containing lessons that are accessible to parents, students and teachers. In one instance, they had to wait 12 hours just to finish a quiz after the website reached full capacity, Shin said.

“I am sure that students will be able to adapt [to the new learning modalities], but I don’t think they will be able to properly absorb the lessons. Even as students struggle to understand the contents of the modules, some parents also do not have the capacity to teach their children,” he said.

It is not only the way subjects are taught remotely, but the content as well that could also be a problem.

Two months after a lesson with a grammatical error was aired on its TV channels, the DepEd admitted a mistake in one of its Mathematics 9 lessons that aired on Tuesday.In a statement on Wednesday, Undersecretary Alain Pascua said DepEd TV Episode 56 carried a solution error in a math equation 2x = 0, in which “0” was used as the divisor to get the value of “x” instead of “2.”

The error was first pointed out by someone from Batangas province and it went viral.

“This portion slipped past QA (quality assurance) … We will be correcting this video episode once it is uploaded on DepEd Commons,” said Pascua.

In August, a communication skills trainer noticed a grammatical error in one of the DepEd’s English TV lessons, which read: “Tagaytay City is known for wonderful picturesque of the majestic Mount Taal.”

Netizens urged the DepEd to thoroughly screen TV lessons before millions of Filipino students tune in to their classes.

Teachers and parents were disturbed by the errors and worried that some students might not have any guardians around while the lessons were being aired and no one would be available to correct these.

Pascua apologized for the mistakes and welcomed criticisms. He pointed out that such concerns could be brought to the attention of the DepEd’s “Oplan Balik Eskwela” hotlines, adding that its personnel could “route [the complaints] to concerned strands within the department for proper action.”

DepEd TV airs lessons on major K to 12 subjects daily on IBC 13 to aid learners who may not have the capability to join online classes. These are also livestreamed on Facebook.

According to a survey conducted by the DepEd, 1.3 million parents preferred TV-based instruction for their children while in-person classes were not yet allowed.

But the Learner Enrollment Survey in July showed that the majority of parents (9.4 million) wanted modular learning for their children. It said 4.1 million favored blended learning; 3.6 million, online; 977,929, radio; and 531,229, other modes.Parents were required to accomplish the survey form before enrollment to help the DepEd determine a household’s readiness for distance education.

Pascua appealed to the public to also recognize the sacrifices that teacher-broadcasters and production teams had made in the past months.

The National Union of Students of the Philippines (NUSP) said the plight of teachers was being romanticized in the media by hailing their sacrifices amid a health crisis.But the the fact is they were given the responsibility of handling modules and procuring learning materials without aid or subsidies from the national government, the NUSP said.

On Monday, the DepEd declared “victory” over the pandemic as more than 22 million students in 61,923 public schools resumed classes under new learning modalities—modular, online, and television- or radio-based instruction.

“The [Commission on Higher Education] and the DepEd are truly victorious in consistently making the students, teachers and staff suffer, and this was especially seen during the first day of classes,” the NUSP said in a statement.

Youth and teachers’ groups said the “victory” resulted in the suffering of the education sector’s stakeholders.

The NUSP criticized Education Secretary Leonor Briones for “[remaining] deaf” to the struggles of teachers, parents and students.Annalyn Sevilla, education undersecretary for finance, explained that DepEd could not distribute the connectivity allowance as this was not part of its 2020 budget.