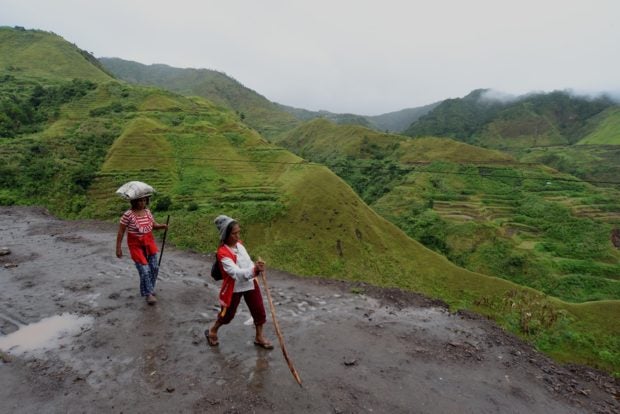 LAND IS LIFE It is the bounty of this land that sustained generations of community members in Tinglayan, Kalinga, that Butbut chieftain Macli-ing Dulag sought to protect when he led the opposition to the Chico Dam project during the Marcos regime in the 1970s. —EV ESPIRITU

BAGUIO CITY, Benguet, Philippines — The Kalinga provincial police sought the removal of a historical marker and monument dedicated to Cordillera martyrs like Macli-ing Dulag, saying this was installed illegally in 2017 in the middle of a road right-of-way.

The move was protested by the militant Cordillera Peoples Alliance (CPA), which put up the memorial for Macli-ing, Pedro Dungoc and Lumbaya Gayudan who led the community resistance to the Chico Dam project in Kalinga during the martial rule of strongman Ferdinand Marcos.

Marcos intended to build four hydroelectric dams along the Chico river which would have displaced communities in Kalinga and Mountain Province, much like the Ambuklao and Binga dams had forced the relocation of Ibaloy families in Benguet province decades earlier.

Macli-ing had been an outspoken critic of the project and had reportedly refused bribes offered by government emissaries before he was killed by soldiers in 1980.

Since his death, groups like CPA have embraced Macli-ing, describing him as “an icon, not only of the Cordillera cause but of the Filipino antidictatorship struggle, and a shining light of the international movement for indigenous peoples’ rights.”

Police Maj. Richard Guidangen, Kalinga police community development officer, said the removal of the monument and marker would still undergo a “long process.” The Kalinga police advisory council had raised the matter in the provincial board for action.

“Whether it will be removed or not, that will be known after a public hearing … It will be a multisectoral decision,” Guidangen told the Inquirer.

He said the Department of Public Works and Highways (DPWH) and other agencies would also be consulted on the matter. 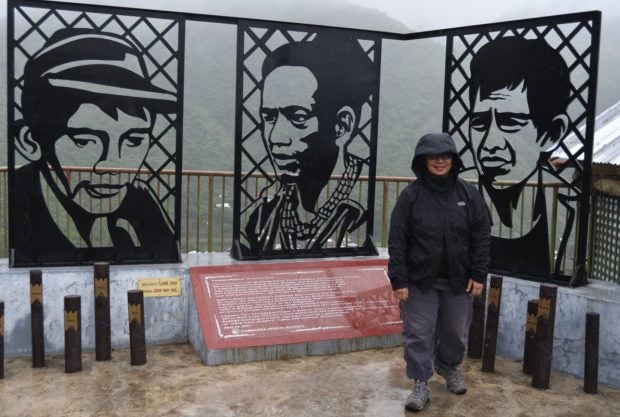 HONORING MARTYRS This memorial, built in 2017 in Bugnay village, Tinglayan, Kalinga, honors Macli-ing Dulag, Pedro Dungoc, Lumbaya Gayudan and other Cordillera martyrs who stood up against the government’s development projects that would have displaced indigenous peoples from their ancestral land. —EV ESPIRITU

“So far nothing has been removed yet. There is an ongoing process for this. We also informed the relatives (of the three martyrs) in (Barangay) Bugnay and they agreed,” he said.

According to a Philippine Information Agency report, the police acted on the findings of the upper Kalinga district engineering office that the marker “lies 4.10 meters from the centerline of the road” and that it “encroached [on] or is within the road right-of-way of the national road.”

The police also said the monument with the marker was installed without the approval of the National Historical Commission of the Philippines since it was in the territory of Bugnay, a “heritage village.”

The memorial lies within the property of Macli-ing’s son, Robert, and the supposed breach of the road right-of-way means the displacement of properties along the Mountain Province-Calanan-Pinukpuk-Abbut Road, according to Windel Bolinget, CPA chair.

It was put up on the request of Macli-ing’s family in 2000 and could not be removed without going through a process, Bolinget said. Pushing it farther from the road would be improbable because it was perched near a cliff, he added.

Called the “Anti-Chico Dam Heroes Monument,” it is composed of a marker and the silhouette images of Macli-ing, Dungoc and Gayudan.

The memorial honors the three martyrs who “sacrificed their lives in the struggle to defend ancestral land and self-determination against … the Marcos dictatorship.” It also honors the Butbut tribe and people in Kalinga and Mountain Province for defending democracy.

On Sept. 18, the Butbut community passed a resolution denouncing the CPA’s alleged appropriation of Macli-ing’s legacy, in support of a government-led campaign against suspected communist sympathizers, Bolinget said.

But the CPA said “Macli-ing was more than a tribal leader.”

“He, Dungoc, and Lumbaya were instrumental not only in uniting their own tribe against the Chico Dam project but in building intertribal unity among Kalinga and Bontoc peoples against that project and its proponent, the Marcos dictatorship,” it said.